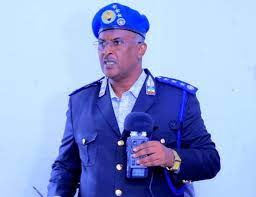 The Police Chief Commander Major General Mohamed Adan Saqadi said that the police force is a friend of the people and that if the members of the public can cooperate with them, then the force will not be able to fulfill its duties as expected.

The general was speaking during the 29th anniversary of the inception of the modern National Police Force in the country. He said that when he was appointed to lead the force he found a sound institution which has come of age hence could perform all its duties and tasks diligently.

He said that six pillars of development were considered important in the force’s capacity building that he embarked on.

These included the bolstering of its strength and qualities, the addition of new police stations, camps, halls and associated amenities, vehicles which are indispensable etc.

He said that the aspect of communication capabilities was highly developed. Of note is the endearing to the members of public in nurturing cooperation and rapport, something the force deems a high priority, since, without it, they would not be able to perfect their tasks and duties.

The police chief said that they have started the establishment of the anti-narcotics department and that many improvements have been made in terms of militarization and transport.

“We have set up a public complaint office with a website and a phone number that anyone who has a problem can contact. The office of follow-up of cases and investigation accountability has been created to step up diligence and see to it that justice is served”, said the Police Chief.

He said that their service men and women are well trained and are conversant on their legal obligations and thus desist from excesses.

Major Gen Saqadi noted that the force has invested lots of effort to achieve self-sufficiency in food, and various crops have been planted in the Wajale police farm.

The Commander said the immediate future plan of the police was to focus on the improvements on training of investigation and leadership of the officers.

Other plans are preparation of an electronic process (database) of all the cases in the country, which will be transferred to the complaint office in all regions of the country.

To be strengthened is also cooperation to work closely with the forces of neighboring countries and Interpol.

He thanked the President and the Minister of Interior for their constant advice and support to the force, the Ministry of Finance and the Accounts Office as well as the local government and some universities in the country that provide free education to the force every year.goo