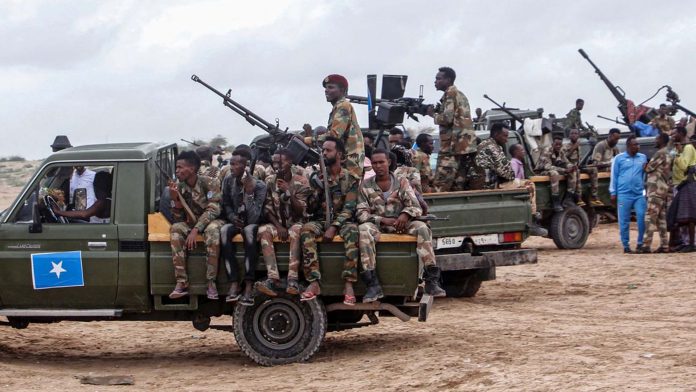 Al-Qaeda-aligned militant group Al-Shabaab launched a dawn attack on a military camp in the central region of Galgadud on Monday, defense ministry and the Islamist group said, days after the area was seized by government troops and allied clan militias.

Somali defense ministry spokesman Abdullahi Ali Anod told the state news agency SONNA that the army had repulsed the attack on a base housing government troops and local forces in Qayib, a village captured from Al-Shabaab last week.

Al-Shabaab military spokesman Abu Musab said, in a statement, that at least 37 soldiers had been killed in the attack, adding that 9 military vehicles were either seized or destroyed.

A Somali military officer in the nearby town of Bahdo told Reuters news agency that the attack began with two suicide car bombs at around 5 a.m, followed by heavy gun battle.

“Al-Shabaab torched the telecommunication station of the town, and so it is off the air now. We know we killed five Al-Shabaab fighters,” Hassan said.