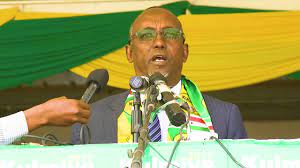 Politics is intensifying in Somaliland where active political parties are in the business of restructuring themselves ahead of the major presidential election scheduled next year.  These re-structures are aimed to foster new alliances and/or maintain old ones to secure the votes of the major voting groups in the country. Oppositional parties are in a constant hustle toward the presidency post amid a massive restructuring that is taking place within the ranks of their leadership.

On the 16th of November, the oppositional party of Waddani restructured its leadership, selecting a new chairman along with six deputies who were given the same ranks and titles within the party leadership structure. The selection took place at the party’s congressional meeting where Mr Hersi Ali Hassan, a former member of the ruling Kulmiye party and the sole candidate for the post, was selected as the new chairman with no official contest– something many analysts in the local politics perceive as an election tactic by the opposition toward achieving popularity in the eastern regions where the new selectee hails from in an expectation that the ruling party will pick the Minister of Interior, Hon. Mohamed Kahin, as the next in line chairman as both hail from the same constituency.

Subsequently, the Waddani party leaders gave different reasons for the leadership re-structure that took place within the party, calling it a democratic exercise in which their party has championed by separating party chairmanship from the presidential candidacy; even though the party’s presidential candidate, the former chairman Mr Abdirahman Irro, was not himself subject to the democratic exercise by abstaining from the vote of confidence during the congressional meeting.

However, the ruling party of Kulmiye is making it difficult for opposition parties to even yield fruits as the Minister of Health Development, Hon. Hassan Mohamed Ali (Gaafaadhi) – a prominent politician, has announced his candidacy for the chairmanship of the ruling Kulmiye party – where the president is expected to vacate soon. Following the announcement, there were many communal gatherings in support of his candidacy, namely in; Buro’a, Balidhiig, Gar’adag, Aynaba, El-afweyn, and Erigavo.  Elders, traditional chiefs, women and youth have all gathered to express their support of the candidacy of the Hon. Hassan Gaafaadhi, denoting the extent of his influence in the country in general and in their communities in eastern regions in particular.

The support of the communities comes in gratitude for years of developmental interventions ushered by Hon. Hassan, as a development practitioner and former heads of many humanitarian assistance missions in Somaliland, saw many developmental projects in the areas of water, health, sanitation, protection, agriculture, livestock and remarkably other interventions aimed at social rehabilitation that were implemented both back in the war era during inter-tribal conflicts and insecurities and then when Somaliland was in the course of its state-building. The background of the Minister remains closely tied with community development, civil service and nation-building.  Some of the projects that were implemented through the developmental interventions he once headed are still of benefit for the local communities.

Consequently, the announcement strategically comes with desperate efforts of oppositional parties to achieve popularity in the eastern regions and pull apart masses of support for the ruling party in the eastern regions– a reason many observers of the local politics believe the chairmanship of Hon. Hassan Gaafaadhi will be of remedy and fits as the most effective counter-strategy for the ruling party against oppositional expansionism theory. Many people in eastern regions believe that for Kulmiye to maintain the support from the masses of voters in eastern regions, it has to employ a different counter-strategy than that taken by the opposition. It is believed for a fact that the chairmanship of Hon. Hassan Gaafaadhi will serve as a great blow in the face of opposition given how his constituency remains a huge force to reckon in countering oppositional expansionism. Oppositional expansionism is centred on Hersi’s Waddani chairmanship; a quid-pro-quo for votes. However, the fact of Hon. Hassan’s being at the helm of the ruling party will have the opposition having lost all or nearly all hope of making that ‘quid-pro-quo work.