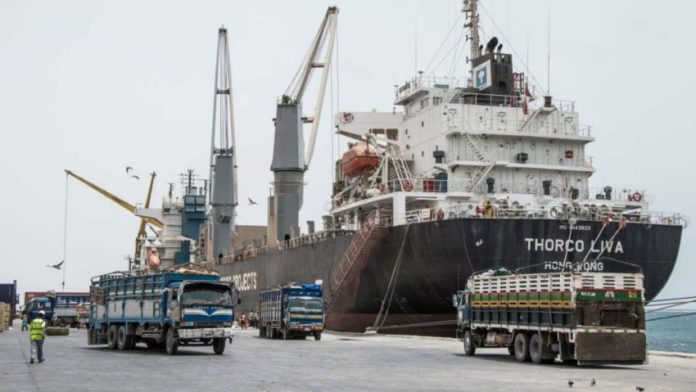 Comment: Abu Dhabi is seeking greater control in the Horn of Africa under the guise of providing stability, writes Jonathan Fenton-Harvey.

In trying to establish itself as a major economic and regional power, the United Arab Emirates has set its eyes on the Horn of Africa.

Recently however, it has faced setbacks in trying to control the geostrategic region, and has even resorted to using destabilising policies in order to get its own way.

Over the last decade, the UAE has gradually increased its presence in the volatile region, using development and humanitarian projects to boost its prominence.

It has significantly invested in ports, logistics and trade developments, to secure its port empire across the strategic Bab el-Mandeb Strait by the Red Sea, to profoundly boost its international trade and regional soft power.

The Emirati-owned company DP World’s opening of a port in Djibouti in 2008 signalled a developing presence in the relatively then-untouched Horn of Africa.

This followed a 2006 deal with then-Yemeni president Ali Abdullah Saleh, for greater trade rights in the strategic port city of Aden. Yet the subsequent president Abdrabbuh Mansur Hadi scrapped this deal, leading to the UAE’s assertive attempts to control and occupy southern Yemen throughout the war since 2015.

Meanwhile, Abu Dhabi has sought greater control in the Horn of Africa, under the guise of providing stability.

Ethiopia has served as a key platform for growing Emirati influence, where Abu Dhabi alongside Saudi Arabia helped broker a peace deal with Eritrea, after a two-year state of war between the two states.

It has since continued to shower Ethiopia with aid, also carrying out key development projects. The UAE had also built an oil pipeline between Eritrea and Ethiopia, and Emirati companies have increased investment particularly in Ethiopia. Furthermore, it boosts the UAE’s soft power, as the states are more dependent on its presence.

Such moves are also an attempt to compete with Turkey, Iran and Qatar, whose increasingly positive ties with east African states are met with unease by Abu Dhabi.

A setback for the UAE’s political ambitions in the Horn of Africa however are its ties with Somalia. While the UAE previously held good ties with Mogadishu, the parties fell out last year. After the 2017 inauguration of President Mohamad Abdullahi Mohamad, Somalia declared neutrality in the Gulf crisis.

Meanwhile, Somalia has grown closer to Turkey, a key Emirati rival. Somalia’s foreign minister in May laudedMogadishu’s booming relations with Turkey, which follows an increase in trade in recent months. Turkish firms have also secured contracts in Somalia, showing an increasing drift towards cooperation with Turkey.

The UAE sees both developments as provocative and has since tried to support Somalia’s autonomous regions, while undermining the Somali government.

DP World, the facilitator of the UAE’s sea-trade empire, had invested $442 million in Somaliland’s Berbera port. This “opens a new point of access to the Red Sea and will complement DP World’s existing port at Djibouti in the Horn of Africa”, according to DP World.

DP World’s chairman in April met with the President of Puntland, another Somali autonomous region, agreeing on further investments on the UAE-developed Bobaso port.

The UAE and Ethiopia in February agreed to cooperate to turn Somaliland into a “major regional trading hub,” which helps the UAE’s ally Ethiopia gain greater trading access, and subsequently boost the UAE’s own trading and economic capabilities. Furthermore, its alliance with Ethiopia, which also invests in Somaliland’s Berbera port, has helped the UAE gain greater control over it.

The UAE has also attempted to build a military and navel base in Somaliland. Not only would this help secure its presence in the Horn of Africa, it would give it greater capabilities to wage war on Yemen.

Yet the UAE’s support of these autonomous regions creates further divisions in the region and weakens Somalia’s authority, which is Abu Dhabi’s aim. It also helps the UAE secure control over its ports in Somaliland and Puntland, while weakening its rivals.

Following the overthrow of Somali dictator Mohamed Siad Barre in 1991, Somalia’s autonomous regions declared independence, dividing the region. While the question of reunification has persisted, the UAE is now seemingly aiming to keep the fractured status quo.

Along with supporting the regimes in Somalia’s autonomous regions, the UAE has attempted to warm ties with former Somali politicians and opposition figures.

Financing candidates such as former Somali Prime Minister Omar Abdirashid Sharmarke, and opposition figure Abdirahman Warsame is another attempt to sway Mogadishu towards Abu Dhabi, or at least fracture the Somali government.

While the UAE previously established a hospital and security projects in Somalia, the fact it ended these last year shows that its presence is not about humanitarianism, but rather geopolitical control.

Abukar Arman, a former Somali diplomat who served as Somalia’s Special Envoy to the US, said that the UAE has “bankrolled various mercenary groups engaged in various clandestine operations that ultimately sustain [Somalia’s] status quo.”

The Mogadishu government recently arrested a UAE spy network within Somalia, according to social media reports, which would be linked to the UAE’s regional ‘spy empire’.

Abu Dhabi’s spy operations have been suspected elsewhere in the wider region, including in Turkey, and even reportedly within closer allies such as Bahrain, showing this is a common practice for the UAE.

“The UAE is aware that the current Somali government has failed to put reconciliation on top of its agenda, hence cannot reclaim sovereignty over all its territories,” he added.

A fragmented Somalia would ultimately restrict the UAE’s political ambitions, if it reconciled with the autonomous regions. Turkey and Qatar’s support for the government would help strengthen Mogadishu’s control, and prevent the UAE establishing complete dominance over the Bab el Mandeb, while also challenging Abu Dhabi’s control over the ports.

The UAE might well find however, that punishing Somalia for moving closer towards its rivals will be counterproductive; since Mogadishu will be more dependent on outside support, potentially helping to cement ties with Turkey and Qatar.

In fact, the UAE’s influence is already declining, after the Djibouti’s nationalisation of the Doraleh container port last year. With threats to Djibouti’s government following, the UAE may take future action to punish it and regain influence.

Competition from China is also arguably restricting the UAE’s previous dominance in the region, with Chinese Exim bank granting loans to Somalia. There’s also the risk of future competition over Emirati-influenced ports, as DP World’s rival – China Merchant Port Holding Company – had secured a stake in Djibouti’s Doraleh port in 2013.

All of these challenges mean that Abu Dhabi’s ambition to position itself as a global economic power may not be as straightforward as it first thought.

Jonathan Fenton-Harvey is a freelance journalist.