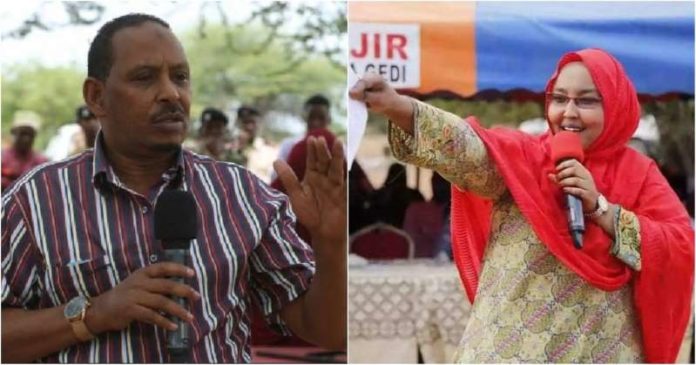 Kassim reportedly punched the female MP leaving her with a bloody mouth after quarreling over budgetary allocation in his constituency.

National Assembly Speaker Justin Muturi on Thursday, June 13, directed the police to arrest the MP and conduct further investigations into the matter noting the action was criminal and could not be protected under the Powers and Privileges Act

“I direct that the police investigate the matter on the alleged assault on Wajir Woman Rep.,Hon. Fatuma Gedi, and if necessary prosecute whoever is found culpable. Rules that the matter is criminal rather than a matter for the Committee of Powers and Privileges,” he said

Prior to his arrest, the female MPs threatened to disrupt the evening session scheduled for budget reading by storming out of debating chambers to protest assault on Gedi.

Led by Homa Bay Woman Representative Gladys Wanga, the female politicians castigated their male counterparts for disrespecting and undermining their role in leadership.

“We do not want to believe it is by coincidence that the Majority leader yesterday termed women leaders as endangered species and flower girls and today a woman is assaulted,” she said

The Wajir East MP accosted his county woman leader at parliament’s parking lot for allegedly failing to allocate any funds to his constituency despite being one of the leaders from the region who had the privilege to sit in the National Assembly’s budget committee.