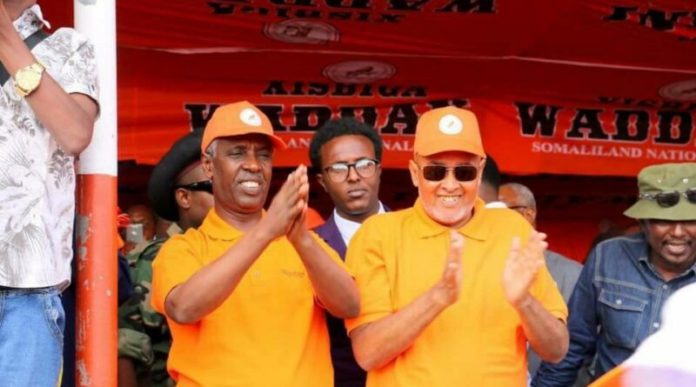 The Wadani party is using a dispute over a member of the electoral commission as an excuse to not contest in the upcoming 2020 Somaliland legislative elections. They’re complaining about the ruling kulmiye party’s member of the electoral commission, Mr. Abdirashid M. Ali (“Riyo-Raac”), whom they alleging to be a partisan political hack. Majority of the seven member of the commission are Kulmiye; Wadani has only one member. Therefore, it won’t make a difference even if the ruling Kulmiye party replaces Mr. (“Riyo-Raac”).

The way it was originally set up, the makeup of the electoral commission always favors the incumbent President’s party. In fact, Mr. Cirro was the speaker of the Parliament for 13 year, but he never tried to address or to fix that problem. Instead, he supported term extensions for both houses of the legislature, during the Silanyo/Hersi administration. However, the current extension for the legislatures is unwarranted if Cirro and his party just contest the upcoming elections.

Definitely, we need to fix the makeup of electoral commission, which is a rig system, after the election—to make the election process fairer and competitive.

Moreover, Kulmiye is the majority party and controls all the branches of the government. They borrowed a page from the now defunct Udub party’s playbook and they’re doubling down to hold grip on power. The majority rules. Mr. Cirro, the chairman of the Wadani party, should quit whining about the electoral commission and focus on how to win.

To win elections, Wadani party should have agenda to address the most pressing issues of the country: reducing high maternal and infant mortality, accessing clean water and affordable energy, tackling youth unemployment, reducing abject poverty, spurring economic development, a instituting a fair and equitable tax system, and opening up our political system. Their message must be, “put us in power because we have a better ideas and platform than Kulmiye party to make Somaliland a better place for all Somalilanders.”

For instance, it’s neither fair nor sustainable that the Somaliland tax system is based primarily on sales taxes that burden our poor. We can’t fund the government on the backs of impoverished citizens. By contrast, cellular communications, banking, money transfer and other big commodity traders pay little or no taxes because they bought out the corrupt legislators and the Ministry of Finance.

The current political system is a rigged system dominated and manipulated by a few oligarchs who are using corrupt politicians, hypocritical clerics, and clan identity politics to promote their narrow interests. Those oligarchs have already planted the seeds to hamstring our freedom, economy and democratic process.

The only way to curb their stranglehold on our political system is for principled legislators who are willing to fight for ordinary Somalilanders—- to take over the new legislature. An opposition based on principle is what Somaliland desperately needs now.

But if you’re a loyal principled wadani supporter, and you want a free, peaceful and prosperous Somaliland where the rule of law is respected, you should concern about when a corrupt and discredited individual like Hersi Hassan is leading the party.

Hersi Hassan was a former employee of Dahabshill money transfer who became a senior aide to President Silanyo in 2010. During his tenure to Silanyo administration, he blatantly abused his power: He repeatedly deployed during midnight raids the RRU, an anti terrorist force, to harass and intimidate journalist and his political opponents. For instance, he even sent a young girl to jail for sending him a text message protesting the government’s mishandling of the demonstrations against election results in 2012.He shut down the daily Haatuf newspaper after it reported allege corruption on former Silanyo administration.

Hersi allegedly managed to embezzle the public funds for the construction of Burao-Erigavo Hwy. So far, millions intended for the highway project were unaccounted.

And now, every morning, Hersi gets up from a villa that he said Silanyo gave him as a gift as though Silanyo was a king. He’s badmouthing about our duly elected President by comparing him the likes of Said Barre and Idi Amin. We want to remind Hersi and ‘Sowers and exploiters of division’ of the Wadani party that President Bihi has a mandate to rule this country from the people of Somaliland.

Moreover, the leadership of Wadani and their surrogates are consumed with whinning and complaining, and apologizing about Somaliland: “the 2017 presidential election was rigged, Somaliland is not inclusive enough, we’re not included in this, we are not at table in that, and President Bihi is a dictator….”, and so on.

It’s obvious that Wadani party is desperate and running out of ideas and sound policy, and now they resorted to politics of character assassination, cheap lies and name-calling and violence, instead of addressing the most pressing issues that matter most of the ordinary Somalilanders.

I know it has been difficult time for Wadani since losing the 2017 presidential election—-an election they supposed to win. But Partisan rancor, divisive rhetoric and deep clan divisions will never bring our people together or move Somaliland forward. It’s time the politicians put country before party or clan.

Finally, if  Cirro wants Wadani to take over the legislature– he  should spend less time complaining about the result of the 2017 presidential election and the electoral commission and more time appealing to all voters and not only to his clan identity-based supporters— he might have more success holding Kulmiye  administration accountable.