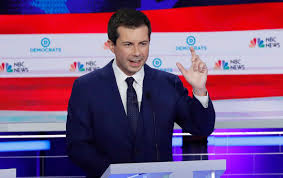 It is possible for Somaliland to have a friend in the White House in the upcoming year?

That is the question many Somaliland people are asking themselves after the re-emergency of decade years-old New York Times Opinion Article in the midst of U.S Presidential election

Leading democratic candidate, Pete Buttigieg visited Somaliland in the summer of 2008 and called for its immediate recognition.

He is the democratic candidate for president, the Mayor of South Bend, a small town in the Indiana State. But before that and before becoming one of the front runners of the democratic primaries, he was a management consultant Mckinsey.

He paid a courtesy call to Somaliland in the summer of 2008.

The country made the impression on the 2016 year-old prodigy that he wrote an opinion article about it at the New York Times.

Although he gave the article the title “Tourists in Somaliland”, the article was hardly about tourism in the country.

It argued that the US was neglecting to support Somaliland thriving democracy and initiating a formal recognition process.

After jotting down Somaliland’s positive strides, Buttigieg argued that the int’l community was not only ignoring them but endangering them.

He reiterated that SL without an int’l recognition could not engage bilateral trade accords or exploiting its rich natural resources.

Twelve years later, Buttigieg, who us now an ex-Mayor, Pete is likely to emerge the Democratic candidate for the U.S President.

So far he had not repeated his statement on Somaliland during his bid to US presidency.