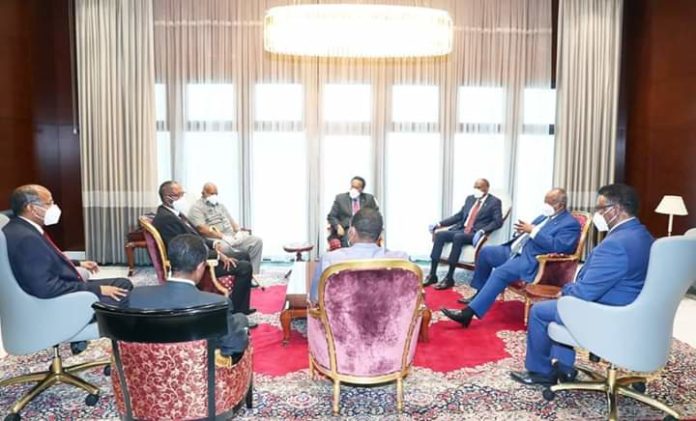 Somaliland president Muse Bihi and his Somalia counterpart Mohammed Abdillahi Farmajo are set for another round of meeting in Djibouti to discuss the frosty relations between the two nations.

This will be the second time the two leaders will be meeting this year after an earlier meeting in Ethiopia brokered by Prime Minister Abiy Ahmed in February.

The meeting comes just days after Somaliland President Muse Bihi urged the international community to hand the country recognition and have it admitted to the United Nations.

In an interview with the Voice of America, Somalia Service Bihi accused the Somalia leadership in Mogadishu of being the biggest stumbling block in their quest for self-determination.

“It is time Somalia’s leadership and the international community to accept “the reality of two independent nations- Somalia and Somaliland,” Bihi said in the interview.

President Farmajo’s government has been openly hostile to Somaliland and has taken steps to isolate it and oppose development projects including DP World’s investment in Berbera port.

Just a few days ago, Somaliland government told Somalia to keep off its internal affairs after the latter’s minister for foreign affairs Ahmed Isse accusing DP World’s continued operations in Somaliland as a danger to his country.

The Somalia minister had said: “DP-World has endangered the Unity of Somalia and has never stopped interfering in our country. We are ready to defend our country from DP-World as any other enemy,”

But in a rejoinder, Somaliland said Somalia should focus on their affairs as a country and work towards finding internal peace which has been lacking for years.

The planned meeting in Djibouti is understood to have been brokered by the United States Ambassador to Somalia Mr. Donald Yamamoto.

President Bihi will be accompanied by the Minister of Foreign Affairs and International Cooperation Hon. Yasin Hagi Mohamoud Hiir and the Chairman of Somaliland House of Elders Chairman Hon. Saleban Mohamud Adan. The delegation of the Federal Government of Somalia will include the Prime Minister Mr. Hassan Khaire.

Somaliland has previously maintained that any talks with Somalia should focus on her independence and recognition as a separate state from Somalia.

Ambassador Donald Yamamoto, has since his appointment adopted a one Somalia policy and has had little contact with the government of Somaliland, something that has openly angered Somaliland.

It is understood that the Sunday meeting will also have Djibouti president, Ismail Omar Guelleh and  Ethiopian PM Abiy Ahmed in attendance.