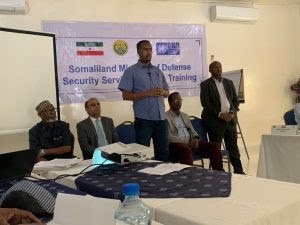 The Director General of the Ministry of Defense Mr. Jamal Abdillahi Muhumed has today in Hargeisa opened a case management training event for 15 of the staff of Somaliland security service courts including Attorney General, Vice Attorney General, the Chairman of the Security Services Court and Judges.

The training,  organized by Somaliland Ministry of Defense in collaboration with UNSOM office in Hargeisa, will continue until 13th December at the Ambassador Hotel and is aimed at enhancing the capacity of security service courts in relation to case management, record management, case follow management and other important aspects of security service courts according to the facilitators of the training Mr. Zafar Gondal and Abdisalan Yusuf of UNDP and Professor Mohamoud Hussein Farah of University of Hargeisa.

In his opening remarks, the Director General emphasized importance of capacity building training for the staff of security services courts and that they already apply the knowledge and skills they had gained from the previous court training also supported by UNSOM.

“We benefited from the previous training very well and hopefully this (training) will further strengthen the capacity of security service courts staff. I believe professional development trainings will be continued and that this will not be the last training we receive.” Mr. Jamal Abdillahi said.

Gary Pugh, Military Advisor from UNSOM who provided a brief speech at the opening session said “I know this training follows on from very successful training in April and is a priority for the Ministry of Defense. The continued review and development of Security Services Courts practices and procedures is essential if the Courts are to continue to hold the confidence of those who are under its control and the wider Somaliland public.”

This is the second training following the Jurisdiction and Human Rights Training completed in April 2018 and is part of efforts aimed at enhancing the capacity of security service sector.