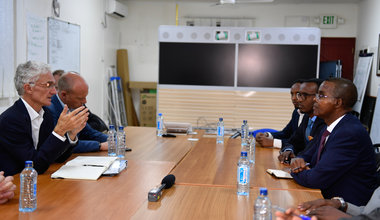 Mogadishu, 12 September 2019 – There is a need for sustained funding for humanitarian response to avert a deterioration in the food security situation, which threatens millions in Somalia who are already affected by the worst poor crop harvest since 2011, said the UN humanitarian chief, Mark Lowcock, on Thursday.

Mr. Lowcock, the UN Under-Secretary-General for Humanitarian Affairs and Emergency Relief Coordinator, was in Somalia together the World Bank Group’s Senior Vice President for the 2030 Development Agenda, Mahmoud Mohieldin, and the UN Assistant Secretary-General for Peacebuilding Support, Oscar Fernandez-Taranco. During the visit, the senior officials witnessed first-hand the linkage between humanitarian, peacebuilding and development efforts in the country. In Baidoa, the delegation inspected donor-funded projects that support internally displaced communities.

Addressing a press conference in Mogadishu, Mr. Lowcock said, “Notwithstanding all the action that has been taken to deal with the humanitarian needs some months ago, there is a continued need, which will need to be addressed by additional financing, just to safeguard the humanitarian situation over the next several months.”

According to the latest information provided by the UN Food and Agricultural Organization’s Food Security and Nutrition Analysis Unit and Famine Early Warning Systems Network, Somalia’s recent cereal cropping has been the worst since 2011.

FAO blamed the fragile food security situation in Somalia on the delayed and erratic Gu rains between April and June, which negatively affected crop yields.

This year’s humanitarian response plan for Somalia has received US$487 million, which is less than half of the required financing to deliver life-saving assistance for the year.

The Federal Government of Somalia and the humanitarian community launched a Drought Impact Response Plan (DIRP) which has kept at least one million people from acute food insecurity up to September.

Lowcock noted, “One million fewer Somalis are hungry today than we had thought would be the case; and that is because there was collective international response three months ago when it became clear the country was running into problems.”

However, more funds are still required to mitigate the effects of the ongoing drought, and bring relief for up to six million people at risk of food insecurity.

The World Bank Group’s Senior Vice President for the 2030 Development Agenda, Mahmoud Mohieldin said they would partner with authorities to support economic engagement for local communities.

“We are engaged in a variety of projects, and all of these projects have been studied very well. Many of them are in partnership with the UN System, NGOs and of course the government,” Mr. Mohieldin said.

In Baidoa, the delegation visited community development projects and toured a sports facility, where they appreciated the priorities set by the communities and heard directly from community members what additional social impact projects they would want to see.

Mr. Fernandez-Taranco said, “Somalia’s full potential can only be realized through community-led approaches. We as the UN must listen to the voices of the people and align our support to their priorities.”

“To see the efforts that are currently being undertaken is very important. To institutionalize, to bring the unity of the country back together for the purpose of supporting and responding to the needs of the people,” the head of UN peacebuilding efforts noted.

He added, “So, here, the Peacebuilding Fund will be very much focused on aspects of reconciliation and strengthening the capacity of national institutions on conflict prevention and to manage and to build peace.”

Later, after the delegation met with the Prime Minister of Somalia, the President of South West State and government ministers, Mr. Mohieldin mentioned that their discussions revolved around normalizing the relationship between Somalia and the international financial institutions, something which has the potential to bring a new beginning for the country.