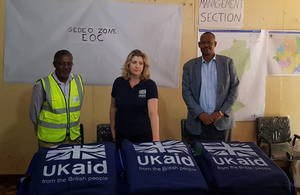 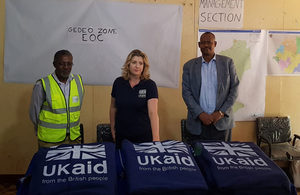 The International Development Secretary, Penny Mordaunt, has today launched the UK’s biggest ever tax partnership programme to help Ethiopia generate more tax during her visit to the country.

The programme will transform Ethiopia’s tax system, helping it to harness the potential of its booming economic growth. This new partnership will also help the country generate revenue so that it can better finance its own services and development, becoming less reliant on aid.

Ms Mordaunt will announce the scheme today before a meeting with Ethiopia’s Finance Minister, Dr Abraham Tekeste. She may also have the opportunity to meet new Prime Minister, Dr Abiy Ahmed, becoming the first UK Government Minister to do so.

Ethiopia is rapidly industrialising, and with this new partnership the UK will support the country to meet its ambitions to develop its economy. Extra tax revenues will help the country tackle poverty, invest in its own services, boost economic growth and move beyond aid.

During her visit to the country, Ms Mordaunt visited UK garment factory Hela at Hawassa Industrial Park to see how the country’s industrialisation is opening up opportunities for UK business, trade and investment. She marked the launch of the previously announced Jobs Compact which is creating over 100,000 jobs for some of the most vulnerable Ethiopians, including refugees.

Ethiopia is currently host to over 900,000 refugees from across the region. By empowering refugees to get jobs, the UK is helping them to rebuild their lives so that they do not seek dangerous migratory journeys outside the region. This is ensuring Ethiopia remains a force for stability in a volatile region.

She also announced new support to improve the welfare and security of employees at the Industrial Park.

Ethiopia’s security, development and prosperity matter for the UK – which is why we’re working with the country to help it generate more tax from its rapid growth. This will help Ethiopia fund its own development – and ultimately transition beyond aid.

We’re also helping the most vulnerable Ethiopians, including refugees who have fled neighbouring countries, to find jobs and rebuild their lives, creating the stability which will allow Ethiopia and the region to prosper.

This is a win for Ethiopia and a win for the UK, including British businesses such as Hela which are thriving in East Africa.

During her visit Ms Mordaunt also had the chance to visit a camp for internally displaced people in Ethiopia, where over two million people across the country have been forced to leave their homes. She saw first-hand how the UK’s flexible response is currently providing an uplift in basic lifesaving support for almost a million people.

Amid historic change and optimism in the country, Ms Mordaunt will today also launch a Civil Society Support programme to empower some of the most vulnerable people in Ethiopia, including those with disabilities, to have their say in the changes happening in their country.