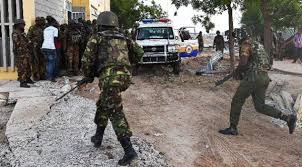 Four civilians and two suspected Al Shabaab militants were killed around 2.30 am Tuesday morning after attackers attempted to invade a police post in Dadaab, Garissa County.

“I can confirm that there was an attack which happened early this morning where four civilians were killed and two militants were gunned down,” he said.

Mr Soi said children were among the victims but did not specify the number, saying authorities were still gathering more information on what had transpired.

The attackers are said to have been targeting a communications mast in Saretho area.

He said the Somalia-based militia group was targeting the mast before the attackers were repelled by security officers.

A multi-agency security team is currently combing the area.

The latest incident comes just two days after Al Shabaab militants carried out a bold attack on the Manda Bay naval base in Lamu County where three Americans died.

The terror group has escalated its attacks in Kenya and Somalia in recent months amid increased vigilance and patrols by local security authorities.