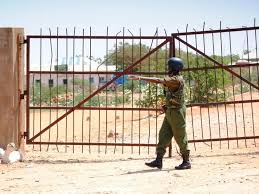 I have been thinking about the ongoing attacks on Kenyans at the porous Kenya-Somalia border, even though it is still closed.One thing is clear, contraband goods getting through the border are the main cause of terror in Northern Kenya.I know for a fact that there are contraband goods that include milk, cooking oil, rice, sugar and other products that are still getting into the country despite the fact that it is still closed.This is killing our local industries. It is also denying the country much needed revenue.My research shows hundreds of lorries cross the border every night with contraband goods, which end up in our homes.For those behind the trend to ferry such huge consignments conspicuously through Somalia without terror incidents and make it across the border, it implies that they are financing terrorism.

This is done through the proceeds of this cross-border crime either in protectionist levies, kickbacks or other direct or indirect payments.The powerful racketeers involved in operating the illegal business own local militia groups that often masquerade as the Al-Shabaab.These stage attacks on Kenyans to divert security movements for the free flow of contraband.

What many Kenyans might not know is that the proceeds of this cross border crime are used by the racketeers to compromise the war on terror.They are used to buy state intelligence on impeding counter-terrorism actions as well as divide and corrupt our border security forces.This leads to huge losses of our security personnel in stage managed terror incidents with commercial undertones.The contraband supply chain is also used as the conduit for smuggling small arms and light weapons into the country that are feeding into urban crimes and cattle rustling menace.Some powerful politicians behind these economic sabotage are legislating and networking in parliament and influencing policies in government, thereby rendering counter-terrorism efforts impotent and holding our national security hostage.Some of these powerful figures are local fronts for foreign interests in Kenya hell bent on scuttling our economic growth.If you cared to map quarters from where the most dissenting noise comes from after every crackdown on contraband, you will notice one peculiarity: the noise comes from non traditional Al-Shabaab regions.It comes from people who have never raised their voice against Al-Shabaab attacks. Politicians who earlier appeared unconcerned with attacks on security agents and non-locals.This is precisely why there should be no mercy in the war against contraband.It is the worst form of economic sabotage driven by the Al-Shabaab and their local sympathisers.It is responsible for killing local economies and rendering our young people jobless.Our farmers are broke and our industries are struggling to stay afloat. It is also frustrating the attainment of vision 2030 and the achievement of the Big 4 agenda.There is a deliberate attempt to exploit grievances and discontent and recruit more youths to terrorPerhaps we should open the 29 border points. Their continued closure is only helping to promote smuggling. We can do this by deploying more revenue and security personnel along the border to put an end to contraband.This is the only way to stop a surge in cross-border crimes in the region.Mr Mohammed is a businessman in Garissa.