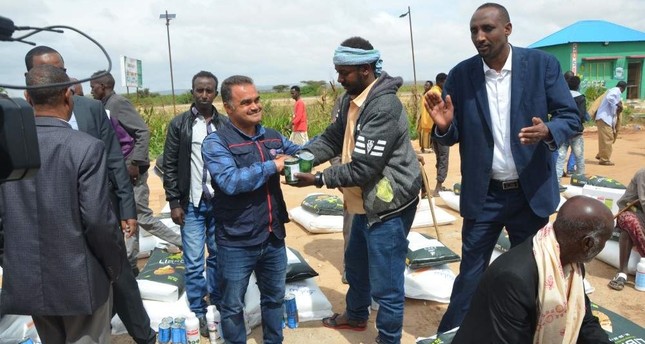 The Turkish Cooperation and Coordination Agency (TIKA) has launched a programme to help boost the quality and amount of crops and livestock in Somaliland.

The agricultural development project will also guide on measures against any threat of future drought.

TIKA officials delivered 40 kilos of tomatoes, peppers, cabbage and lettuce seeds, along with pesticide and fertilizers, to 100 farmers in Somaliland’s vegetable and fruit hub Gabiley.

Yılmaz said he believes farmers will have more profitable production with the support of Turkey and vowed that his country will continue supporting the people of Somaliland.

The next stage of the project will see TIKA training farmers on new agricultural methods and provide modern agricultural equipment.

Somaliland’s economy largely depends on agriculture and livestock exports. Crop farming is the second major contributor to the state’s economy after livestock breeding.

The country’s crops suffer from a lack of irrigation and are mostly dependent on rainfall. Limited cultivation and yield force the country to depend on imports from neighbouring countries.

TIKA has also set up 25 waterwheel projects in Somaliland to boost irrigation systems and power output.

With its unique development model, TİKA prioritizes transparent, human-centred and sustainable approach for its projects across the world, the aid agency’s president says.

With these numbers, Turkey is leading the world in humanitarian aid. Meanwhile, in terms of official development assistance, Turkey has surpassed the United Nations’ target of allocating 0.7 per cent of the national dividend to aid funds this year by dedicating 0.95 per cent.