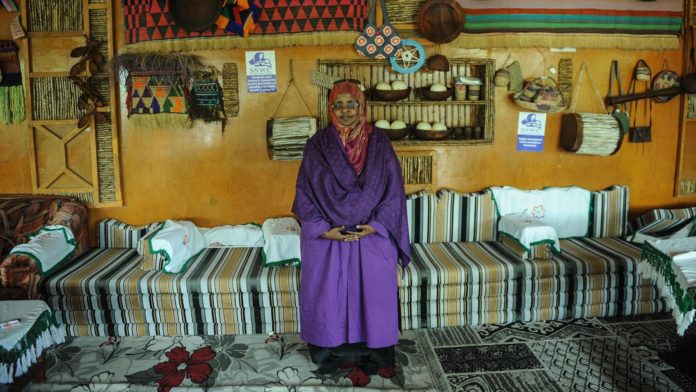 When Mogadishu turned into a battleground for rival clan militias in early 1991, Amina Hagi Elmi was overwhelmed by a much more private conflict.

Having fled a comfortable home in Somalia’s capital with her family, the young businesswoman now found herself beneath a tree in Balcad — 22 miles from her home — and to her despair, she discovered that her period had come. “It was a disaster because I didn’t have any water or soap,” she recalls. “I became very nervous.”

Gathered beneath the tree, Elmi’s father, brothers and in-laws were waiting for her to cook for them, but she remained seated, trying to figure out how to stop the flow of blood. Finally, she tore her scarf in two and wrapped herself with a piece of cloth. Her vulnerability drove her to think of other women like herself out there, stuck beneath a tree.

“When disaster or war strikes, the international community wants to give people water, food and shelter, but there is another need, which is women’s dignity,” she says, passionately gesticulating with her hands as she speaks. Her light brown headscarf is neatly secured under her chin and fitted on top is a sparkly pair of glasses.

AS A BUSINESSWOMAN I USED TO WEAR NEW, FASHIONABLE CLOTHES, BUT I ENDED UP WITH NOTHING.

Elmi, 60, has spent the past three decades trying to protect other women from the helplessness she felt when the civil war broke out. While a bloody armed conflict, severe drought and attacks by the extremist group Al Shabab have made an estimated 2.6 million people refugees in their own country, Elmi has fought for women’s dignity with sanitary pads, scarves and soaps. She’s one of 24 women being honored by the United Nations for World Humanitarian Day on Aug. 19.

In 2011, her campaign was recognized by international agencies when her “dignity kits” were included in the emergency package that displaced people receive from the United Nations-led Shelter Cluster. Each kit contains traditional Somali dresses, scarves, underwear, pants, sanitary pads, soap and laundry detergent. Since then, the organization Elmi co-founded and is directing, Save Somali Women and Children (SSWC), has distributed an estimated 70,000 dignity kits to displaced women and girls in makeshift refugee camps in southern and central Somalia.

Among the women who have received the package of women’s essentials, is Fatuma Sharif. Since drought hit her home region five years ago and caused the death of the family’s livestock, the 58-year-old former cattle herder has lived in a camp for displaced persons in Mogadishu. The basic items from the kit have made her feel “more honorable,” she explains.

“To be able to cover yourself is part of having dignity in the community according to our culture and religion,” says Sharif, who shares a corrugated iron hut with her husband and their eight children and grandchildren.

Mogadishu is home to about 600,000 Somali refugees, according to the U.N., making the city among Africa’s most crowded hubs for internally displaced people. In the unplanned urban camps, makeshift huts provide little security for women and girls, and a report by Human Rights Watch (HRW) has shown that women face a significant risk of rape in the huts at night. The situation is becoming even more precarious as land prices rise and women are being pushed further out of the city, which means longer distances to health-care facilities and potential jobs.

“They get pushed out into areas that are unsafe, so enabling them to have access to even simple effects, could make their lives easier,” says Laetitia Bader, senior researcher at HRW, of the dignity kits.

While dignity kits give women a tool to withstand humiliation, they can’t protect against violent evictions carried out by powerful landlords in Mogadishu. According to the Norwegian Refugee Council, mass evictions have occurred, with up to 40,000 people being kicked out of their makeshift homes during a single month. Why not work against evictions rather than distribute pads and soaps? According to Elmi, SSWC does carry out humanitarian interventions and has provided shelter and water to displaced people, but only the government can deliver permanent housing, she explains. Plus, “if a woman is wearing underwear and trousers, she is better equipped and it gives her more time to react,” she says with a strong-minded look.

When she visits the camps for internally displaced, carrying an aura of authority and determination, women and girls respectfully greet her with “Mama Amina” — a title that makes Elmi beam with pride. But she was far from destined to a life as a humanitarian. Growing up in a middle-class family, the young Elmi studied accounting and management at the now-defunct Somali Institute of Development Administration and Management, and after briefly working with the local government, she started a business of importing drugs to local pharmacies. One morning in December 1990, as 32-year-old Elmi got ready for work in downtown Mogadishu, clan-based fighting to overthrow the government erupted in the streets. Dragging her parents along, Elmi fled the city and ended up under the tree in Balcad. “As a businesswoman, I used to wear new, fashionable clothes, but I ended up with nothing,” she says. “I realized how it was to be internally displaced.”

Mama Amina (right) presents a certificate of participation to a beneficiary in Mogadishu.

When she returned to Mogadishu a month later, it was like “ground zero.” Elmi saw her city destroyed, homes looted and an almost total absence of international organizations. So she decided to take matters into her own hands and, together with other women intellectuals, she began to distribute dresses to women who had lost their homes and belongings. Although Mogadishu was in the grip of war and civilians were huddling in fear, Elmi had the strength to think of others, co-founder of SSWC Hinda Ahmed Farah remembers.

“She was an educated woman and she understood Mogadishu well. She wasn’t looking for money, and I felt I could trust her,” Farah says.

Looking beyond their different clan affiliations, the women founded SSWC together. The initial dignity kits consisted of nine pieces of cloth, as sanitary pads were not available at the time.

Since its founding in 1992, Mogadishu-based SSWC has expanded and now employs almost 300 people working on projects such as a center for survivors of gender-based violence and campaigns for breastfeeding. Still, Elmi often visits the refugee camps to sit with girls and women and listen to their concerns. She and her husband have no kids of their own, but in the camps “they are my children.”