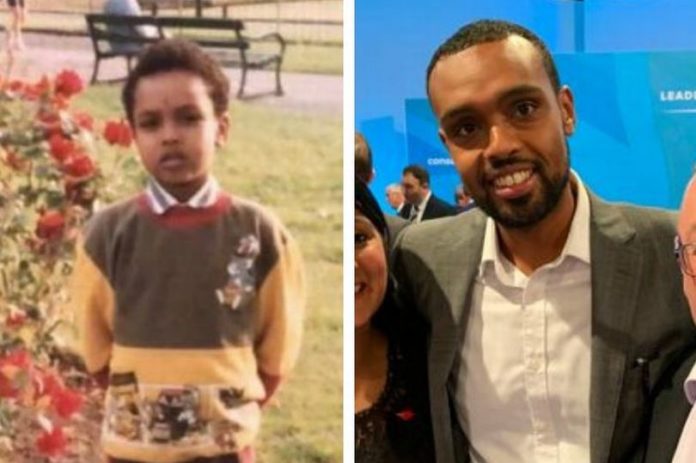 When he was three, Mohamed Ali arrived in Cardiff from his native Somalia.

He’d fled the civil-war ravaged country and arrived in the UK as a child refugee.

He was raised in south Cardiff by a single mum in what he describes as “abject poverty”.

He remembers volunteering to stack shelves in a shop on Loudoun Square just so the shopkeeper would give him some cans of food to feed the family that night.

Mohamed says that without his “strong” mother he could have ended up in jail, or as a victim of knife crime.

Now, 35, he wants to oust Labour’s Anna McMorrin and be the Conservative MP for Cardiff North.

However, he’s a remain supporter – in a party now led by a man who wants to leave “do or die” in October.

He’s Muslim – in a party which has faced claims of being institutionally islamaphobic.

He’s still London based, volunteering as an advisor on counter terrorism and community engagement with the Metropolitan Police in London.

In London, he volunteered to work with the policing council in a community outreach role.

Through that he says he has seen stats and data about civil unrest in the wake of Brexit which are worrying.

He identifies as a “pragmatic” Remain supporter.

“I respect the will of the people,” he says.

“I genuinely believe we need to crack on with it. For the last three years, I have been working in counter terrorism and I have seen the stats and the data. If we deliver on the result of the referendum, I am not prepared to see our UK fall into anarchy and potentially a civil war. I have seen what war does, I fled Somalia. We need to deliver a Brexit that delivers for everyone.

“I don’t want a no deal. I would rather we left with a deal…I suspect we will get one.”

Few expect this Parliamentary term to go the distance, meaning he could see his name on a ballot paper within weeks or months, not years.

“If it’s an autumn election I’ll have to hit the ground running.

“I hope it’s not autumn and I sincerely hope we do get a withdrawal agreement through that is palatable and works for everyone.”

But he says there is more the government should be doing than just Brexit.

“I saw the issues that were affecting the issues around me, not just in London but in Cardiff, and Bristol where I have friends and I started engaging with a retired Scotland Yard commander.

“I started connecting with those BME (black and minority ethnic) communities and those young working class kids in deprived parts of London.

“It bridged that gap because I looked and sounded like them, and I came from that background.”

Mohamed was raised in Grangetown and Butetown – in the Cardiff South and Penarth consitituency – attending primary and high school here. “Cardiff’s always been home for me,” he said.

“I remember when I was about 12 or 13 I was packing shelves in a corner shop in Butetown because we were struggling and we didn’t have any food to eat.

“I’d asked the shopkeeper to pay me with a few bits of food.

“I have walked in these kids’ shoes. When I see a kid lying dead on the pavement in London, or the young boy in Cathays, I think that could have been me.”

What stopped him taking that route was his mother.

“My mum and my grandparents – they were my inspiration.

“I had friends who, as I was growing up, were in and out of prison. That’s always in the back of my mind, how my mother would feel if she had to come and see me in prison after everything she had done for me.

“Those were tough times because in Cardiff at that time, as a young lad I was growing up in what was abject poverty, which was difficult”.

It’s his first attempt at being a political hopeful – so, what does he say he offers Cardiff North? And can he take the seat from Anna McMorrin – a Labour MP since 2017.

“I say this to people a lot. It doesn’t matter if crime is happening on your doorstep at this moment, crime doesn’t wait.

“Crime is on the rise in south Wales and I have got links with the National Police Chiefs Council and I would fight to ensure that South Wales Police gets the resources it needs.