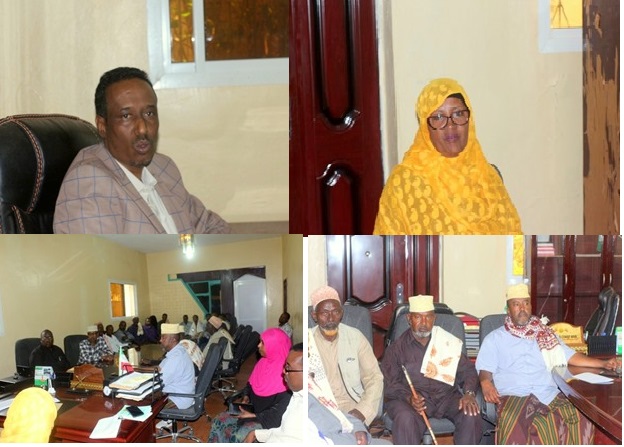 Hargeisa -Traditional leaders and intellectuals from marginalized communities have discussed the legitimacy of the quota for women and these communities with the Office of the Attorney General, following ambiguity in what some say is unconstitutional.

At the end of the meeting, members of the traditional elders and candidates from Daami Constituency spoke to the media and gave details of their discussions with the Attorney General.

Sultan Nasir Sultan Abdurrahman, one of the traditional who attended the meeting, said the Attorney General’s Office has made it clear that the quota for women and their communities is not against the law.

“We have come to the attorney general to enlighten us that the quota for our communities and women is legal, so we have already agreed and now it is legal,” said Sultan Nasir.

On the other hand, these members explained why they are advocating for a quota seat as a community, and said that they do not have specific districts and regions to elect councilors or members of the house of representatives, yet they cannot be absent from more councils. Before they had seats in the House of Representatives.

They also thanked the attorney general’s office for his legal advice and response.

Meanwhile, Attorney General Abdisamad Omar Maal said there was no law prohibiting quotas for women and minority clans, adding that it would be passed by parliament.

“There is no dispute about the legitimacy of the quota for women and minorities. Legally and constitutionally, quotas are enacted by parliament and this bil is currently been tabled in the House of Representatives.”

Abdullahi Omar Maal further said: “We know that women and minorities are not getting the equal political representation due to the circumstances which need to be addressed “Women and minorities should be involved in politics so that they can be equal to the rest of the society.

Finally, this comes at a time this week when Somaliland Women and the European Union issued a joint statement to the House of Representatives recommending the approval of the Women’s and Ethnic Minorities Quota Bill submitted by the Cabinet.