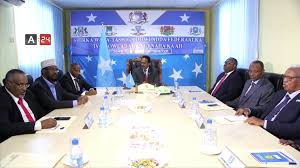 Somali politics represent the main threat to the security and stability of the nation. The political disputes between the Federal Government of Somalia (FGS), and the Federal Member States (FMSs) over the provisional constitution, federalism, election laws, democracy, security, rule of law and resource sharing has continued well into 2020 and many issues are not settled. The result of the crisis continues to burden the country. According to reports, President Mohamed Abdullahi Farmaajo, Prime Minister Hassan Ali Kheyre, and Fahad Yasin, the Director of the National Intelligence and Security Agency (NISA) are using intimidation, and corruption to weaken the parliament and extend their term, compounding the crisis, and leading to the Somali people, the FMS, and opposition groups losing confidence in the leadership of Farmaajo, and Kheyre.

The crisis is imperilling Somalia and undermining progress. To end the dispute, and the avoid political collapse of the federal government, and refocus all stakeholders on improving the political stability and security of the nation, Farmaajo, and Kheyre must end the perpetual crisis they have created, and have been fueling over the past three years, and prioritize dialogue with all stakeholders to advance the interest of the Somali people. Without an agreement and clearly defined policy objectives and goals, the government, and FMSs, along with the international donors, cannot prioritize efforts in political reconciliation, stability, security, and economic development, as well as electoral reforms, institutional capacity building, and other important issues as part of “good governance”, “democratization”, or state-building”.

Over three years after the election of President Farmaajo, and selection of Prime Minister Kheyre, Somalia is in a turmoil and the future of federalism is shaky, and prospect for political agreement with FMSs and opposition leaders are in serious doubt. Along with upcoming 2020/2021 elections, worsening security conditions, and potential health and economic downturn due to the Coronavirus (COVID-19) pandemic looms heavily on the fragile country. In this critical and defining moment, Farmaajo, and Kheyre’s leadership and stewardship must be questioned, because of their grandstanding and failure to negotiate to end the crisis with FMSs and opposition leaders in the interest of the nation, making political stability and security of the nation even harder to achieve let alone sustain.

The risks Somalia faces include Farmaajo – Kheyre – Fahad fueled conflict, political instability, and corrupting of national and state institutions including the federal parliament. The risks also include the use of government resources and machinery for narrow political benefits, especially the use of security forces and intelligence services for election-related purposes to support Farmaajo, Kheyre, and Fahad Yasin’s efforts to extend FGS term, undermining the interim constitution and democracy. The attempts to delay the 2020/2021 elections and extend the FGS term without credible national elections is unconstitutional and will set a dangerous precedent for future Somali governments, and usher a lengthy period of political instability, uncertainty, and conflict that would aggravate security and stabilization efforts.

The political process has stalled since the current dispute started in 2017. It’s been over a year since the leaders of the Federal Government of Somalia and the Federal Members States had a National Security Council (NSC) meeting. Therefore, a dialogue is needed to address key challenges to getting the stalled process back on track. The biggest obstacles to reaching an agreement are Farmaajo, Kheyre, and Fahad Yasin’s corrupting of the parliament and meddling in FMSs affairs. With the use of unregulated foreign funds, the FGS corrupted the parliament and meddled in FMS institutions and elections to elect Villa Somalia allies and yes-man.

These elections served to implement narrow interests of Farmaajo and Kheyre to enhance their status and facilitate their re-election. Without the checks and balances from parliament, FGS leaders have accumulated powers in a “winner-take-all” approach that avoids accountability and reaching an agreement with FMSs to ensure an inclusive government that serves all stakeholders.

The turmoil threatens to reverse hard-won political, security and economic gains achieved over the last decade by successive governments and threatens to close a rare opportunity to bring peace, security, stability, and economic development to Somalia. The FMSs, political leaders and other stakeholders must continue to pressure the Farmaajo-Kheyre- Fahad Yasin to end the crisis and negotiate with FMSs and the opposition leaders to establish a new mechanism for diverse stakeholders to participate in the political process.

Somalia is now beset with serious challenges and faces resurgent violent extremist groups. If left unresolved, the crisis will also become a security and economic crisis that would increase the risk of conflict and instability in the fragile nation. The stability of the nation requires all stakeholders to work together. However, the federal government is widening the divide.

To move forward, political issues must first be resolved. Political stability, improved security, and combating corruption is required to sustain and build on progress made. Farmaajo and Kheyre must do more to combat corruption and establish transparency and accountability in the government. Despite FGS claims, Somalia is ranked the most corrupt country by Transparency International in 2019 corruption perceptions index (180/180 countries) and a score of (9/100).

The crisis was precipitated by two factors. The first is the FGS leader’s use of unregulated foreign funds to corrupt the parliament, political process, government institutions, and elections. The second is the parliament’s abdication of responsibility and failure to play its constitutionally defined role as a check on executive branch excess and overreaches. With 70+ members double-dipping and moonlighting as members of the executive branch, Villa Somalia established a patronage system that allowed dark money to corrupt and influence members of parliament.

The parliament and Villa Somalia have become a cesspool of corruption, and self-dealing, with Pro-FGS members of parliament and politicians lugging suitcases stuffed with cash from foreign sources. FGS leaders flooded the system with unregulated foreign money and the International Community turned blind eye to corrupting of the parliament and state elections. In public, as FGS illegally interfered in parliament and FMS affairs, including facilitating the removal of former the speaker and the election of a pro-FGS speaker. In addition, FGS using funds from foreign sources interfered in the elections of Hirshabelle, Southwest, Puntland, Jubaland, and Galmudug, providing millions to allies in the states. The parliament and the IC partners failed to crackdown and hold FGS accountable. Instead, some in parliament and International donors looked the other away and allowed corruption to become systematic and more entrenched.

Somali leaders must seek alternatives to the federal government and work toward the formation of a coalition national government to end the crisis. Prime Minister Kheyre’s government is no longer politically viable and does not represent the best option forward to end the crisis and refocus all stakeholders to reach a political settlement to confront critical national issues. Farmaajo and Kheyre squandered he political capital to move the process forward, and therefore a changing the prime minister with a consciences builder to oversee the election and the transition process is urgently needed. This new coalition government must also change the leadership of NISA, removing Fahad Yasin from his role, because of his involvement all FGS instability efforts and he is seen as part of the problem and his removal will ease the concern of the Federal Members States and the opposition leaders. The change in leadership will likely restart the stalled process and prevent reforms and elections from falling further behind schedule.

The entire process of reconciliation, electoral and security reforms have stalled, many political leaders have run out of patience waiting for FGS. Somalia must hold scheduled parliamentary and presidential elections, a crucial test for the nations progress in political reconciliation, state-building, and the establishment of constitutional democracy, and rule of law.

We propose a “Mogadishu Accord” agreement that will facilitate the formation of a coalition national government that will work constructively in the remaining months of the FGS term with all stakeholders. We assess the FGS’s activities have been a disaster and changes are needed to prevent further escalation of the crisis that only benefits extremist groups. As Somali leaders ponder options to respond to instability and morphing security challenges, we must all express concern about the FGS leaders are negatively impacting on security and stabilization efforts.

The FGS leaders have squandered a great opportunity to unite Somalia, and they have resisted reforms and, wasted millions on the ill-advised and politically driven adventures, including the deployment of security forces designed to combat terrorism to fight the Federal Member States. While we note the FGS leaders were elected, they have not done enough to resolve the current political issues, and have not governed inclusively, contributing to the crisis we are seeing today.

Somalia needs a fresh start and a new coalition government to rebuild confidence lost over the past three years. We do not think dialogue with Farmaajo, Kheyre, or Fahad Yasin will produce the desired outcome, because they will again renege on any agreement or commitments they make. The FGS leaders cannot be trusted to make peace and move the nation’s agenda forward in the remaining months of their term. We assess that changing Kheyre and Fahad Yasin could facilitate a new push for dialogue and reconciliation. The interim Constitution allows a change and the political process will survive the formation of a new government because there are capable leaders who could be recruited to lead a new coalition government.

To save Somalia, Kheyre and Fahad Yasin must go. For Somalis to close ranks, unify and overcome political, security, and economic challenges, a new prime minister is needed. The fastest way to restart FGS-FMSs negotiations and achieve desired goals is with a new coalition government free of Kheyre, and Fahad, as well as unregulated foreign funds. The stakeholders may be concerned the consequences of changing them this late in the process. We have concluded that it’s important that the president completes his term, but changing Kheyre and Fahad is practical to break the political stalemate, jumpstart dialogue and negotiation with the Federal Member States and opposition political leaders. Supporting the failed status quo will have the contrary outcome and only further exacerbate political tensions and divisions. Ultimately, we must recognize that stability will only come through an inclusive, representative, democratic, and fair system free of corruption that protects the rights of all Somalis including the right to free speech and respects the freedom of the press, and that runs counter to FGS leaders vision, intentions, policies, behavior, and actions.

Mr. Mohamed A. Fatah is a Somali-American executive with over 15+ years’ experience in foreign policy, national security, and regulatory compliance. Mr. Fatah advised current and former Somali federal governments on foreign policy, national security, diplomacy, and engagement with the international community. Prior to that, Mr. Fatah had a distinguished career in the U.S. Government where he served as Senior Advisor and Policy Coordinator to the White House / National Security Council. Mr. Fatah routinely analyzed global issues of concern, resulting in clear, concise, analysis and briefings for the President of the United States, Senior Policymakers at the White House/ National Security Council, and Congress.  Mr. Fatah brings to any discussion an unparalleled depth of expertise, advising the US government, the Pentagon and Congress on political, security, development matters in Somalia and the Horn of Africa region.