They scoffed at opposition non-acknowledging of the government

-They termed the opposition declaration as illegal, null and void

The President of the Republic who is also the Chairman of the ruling KULMIYE party H.E. Muse Bihi Abdi chaired a meeting of the executive committee of the KULMIYE party that resolved to step up the party’s activities in endearing itself even more to the members of the public.

The meeting was held on Thursday 19th November 2022 at the party’s headquarters in the capital Hargeisa. 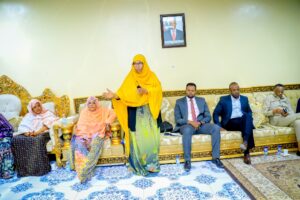 The meeting termed the recent declaration by the opposition fraternity of not recognizing the government of the day as one that held no legal basis, was illegal, null and void.

The President was accompanied by the VP H.E. Abdirahman Abdullahi Ismail (Saili’i) to the meeting of the members of the executive committee.

They focused on the importance of speeding up the activities of the party to endear it to the populace.

They were extensively briefed by the head of the committee which recently made a countrywide tour to all the regions of the country, of bolstering the party’s activities, the second deputy of KULMIYE Mr. Ahmed Abdi-deere.

Foremost, the former Minister of Finance, Mr. Abdicasis Mohamed Samale, who is a member of the executive committee of the KULMIYE party, spoke of the tour explaining the intense meetings that they held with the leaders and communities they visited.

He noted that the populace is dedicated to the government and the KULMIYE party in general.

The meeting scoffed at the recent declarations of the opposition leaders of not acknowledging the government’s legitimacy meeting, terming their resolve as blatantly illegal, null and void.

At the end of the meeting, the general secretary of the KULMIYE party, Mr. Faisal Abdirahman Madar, read the resolutions of the meeting of the executive committee saying, “The party called the statement of the opposition party as completely illegal”.

The secretary, while explaining the points of the meeting, added, “The party praised the President, who is also the chairman of KULMIYE, for protecting and preserving the constitution of the country and the rules of law, and suggested to the president to show patience as he has already depicted but we, however, advise that his patience should not be one that undermines the laws of the country”.