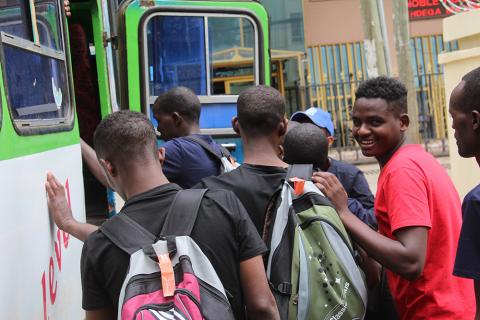 Dar es Salaam – “Facilitating simplified consular assistance that in turn will enable easier access to irregular migrants in prisons”: this is one of the recommendations agreed to at a high-level inter-governmental meeting between the United Republic of Tanzania, the Federal Democratic Republic of Ethiopia and the Republic of Kenya.

Evidence shows that many irregular migrants from the East and the Horn of Africa continue to use the ‘Southern Route’, hoping to reach South Africa. Tanzania, Ethiopia and Kenya fall on this route as origin and transit countries. Migrants travelling in this way can fall foul of immigration authorities for crossing without the requisite documents.

Officials from the Tanzania, Ethiopia and Kenya met from 2-4 April 2019 to deliberate on how to strike a balance between managing irregular migration flows to southern Africa while ensuring that the human rights of migrants are respected and protected.

During the tripartite meeting, technical participants developed 27 key recommendations for addressing detention conditions and alternatives to detention, as well as preventing irregular and dangerous migration, and sustainable approaches to return and reintegration.

The recommendations were adopted on the third day of the meeting and include the harmonization of anti-human trafficking and smuggling laws within the three countries, as well as the sensitization of the diaspora of the countries of origin on the risks of irregular migration. They are in line with the objectives of the Global Compact for Migration which calls for stronger cooperation and comprehensive responses to migration challenges.

The meeting was a culmination of previous efforts aimed at addressing migration issues on the Southern Route. It brought together a high-level audience from the Governments of Tanzania, Ethiopia and Kenya, including the Tanzanian Minister of Home Affairs Kangi Lugola; the Ethiopian State Minister for Peace Zeynu Jemal; and Kenyan Ambassador Michael Oyugi of the Ministry of Foreign Affairs. Representatives for the EU Delegation, donor embassies and UN agencies in Dar es Salaam were also present.

Trafficking in persons and smuggling of migrants in the region were discussed during the meeting; participants shared best practice advice and developed holistic approaches for addressing irregular migration on the Southern Route. They also explored better coordination mechanisms to protect vulnerable migrants, and strategies for improving existing voluntary return and reintegration processes and policies.

Tanzania’s Home Affairs Minister Kangi Lugola commended the decision by Ethiopia to open an Embassy in Dar es Salaam in October 2018. He said the move has enhanced cooperation between the two countries particularly on migration management.

“Since its opening, a total of 301 Ethiopians who were in different prisons in Tanzania have been returned back home; the move signals the concerted efforts of both the Ethiopian Embassy and the Tanzania Immigration Department to address issues of irregular migrants,” Lugola said.

Lugola added: “As we are forging ahead, we should cherish our cooperation on issues of mutual concern and interests on migration-related matters as agreed. At this juncture, l appeal to our governments to expedite the implementation of the agreements on areas of migration matters.”

The meeting was financed under the European Union (EU) – International Organization for Migration (IOM) Joint Initiative in the Horn of Africa. The programme is part of the larger EU-IOM Joint Initiative for Migrant Protection and Reintegration which facilitates orderly, safe, regular and responsible migration management through the development of rights-based and development-focused policies and processes on protection and sustainable reintegration. The EU-IOM Joint Initiative, backed by the EU Trust Fund, covers and has been set up in close cooperation with a total of 26 African countries.

The EU is committed to supporting an effective management of South-South mixed migration flows.