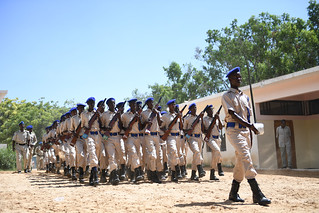 The Police officers are the first batch of new recruits for South West State Somalia.

They will be part of the South West State police force to secure and maintain law and order in the liberated areas from Al Shabab militants.

South West State leader, Abdiasis Mohamed Laftagaren was the chief guest at the passing out parade and congratulated on the graduating police officers compromising 24v females and 371 males.

President Laftagaren also urged to be exemplary in terms of professionalism, strive to deliver justice and work closely with the public.

“You are well are of the security challenges in the areas that you come from and the high expectations placed on your shoulders make good use of the skill and expertise you gained from the training help secure the area. Impartially, wholeheartedly preserve and protect the rights of the citizens.” Said the President

The police boss, Major General Hasan Mohamed commended the recruits for their discipline and dedication during the training.

“Exercise now powers vested in you as police officers. Always show professionalism in your institution of duties. Treat all persons with respect.”  Said Amisom police boss