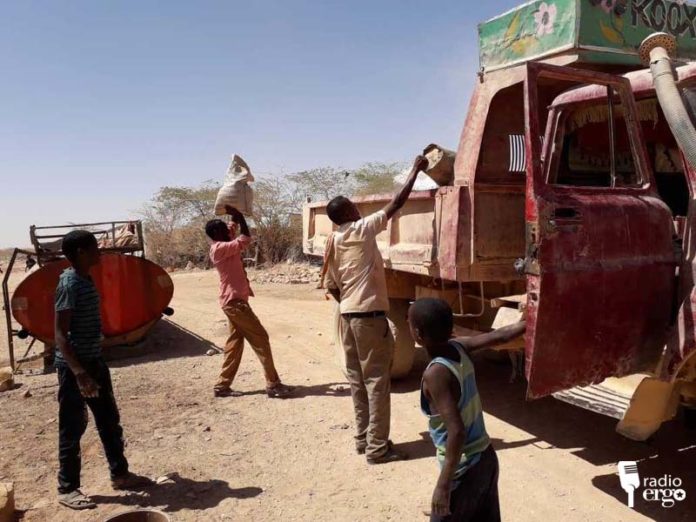 A clean-up campaign by youth in Hingalol village in northern Somalia’s Sanaag region is fast transforming the once dirty streets and inspiring locals to keep their environment clean.

The clean-up launched last month is attracting many volunteers intent on taking responsibility for their environment.

Ahmed Bile Ismail, one of the volunteers, has loaned his truck to collect garbage.

“This is voluntary work – we stood up to show our people the value of keeping our village clean. There are some roads that are actually cut off by heaps of garbage and ‘Garanwaa’ trees (parasite bushes),” Ismail told Radio Ergo.“We began going around the village telling residents to put their rubbish in one location so that it can be collected from those points.”

Ahmed, a father of three, said the area has no local government cleaning department.

“I decided to offer my truck to the group. The bad conditions in the village made me join in the exercise to clean up the village,” he said.

Yussuf Farah Saed, Hingalol chief, said he is impressed by the results of the campaign using simple tools and hard work.

“Much of the waste has been collected from the village especially during clean-up days. The youth also cut trees that blocked the roads in the village and that made people able to use roads that had not been open for a long time,” the chief said.

“Most of the villagers complain regularly about stomach illnesses. In January, we treated 20 people with diarrhea.  This could be attributed to the lack of hygiene,” he said.

The residents have also lauded the move to clean the village.RukiyoIssa Osman said the campaign has transformed the village.

“The village was very dirty, but this move is making it into an appealing area. Before the volunteers organized garbage collection, there used to be piles of rubbish in front of my house,” she said.

Another volunteer, Hassan SharmakeArre, said they wanted people to live in a safe and clean environment and that could only be achieved when people joined hands in the campaign.