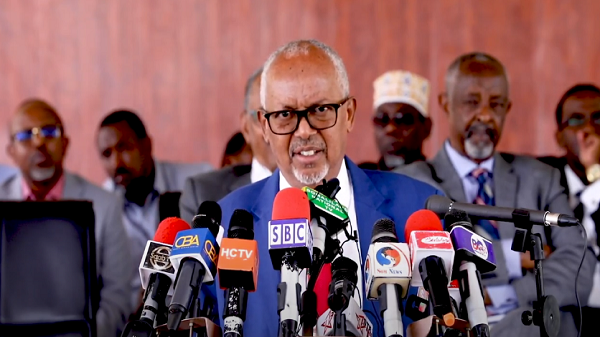 Somaliland Vice President Abdirahman Sayli’i has dropped out of contest to the 4th deputy chairman of the ruling party, leaving his bitter rival in the race to the position.

Mr Sayli’i said he chose to quit the race for the party position in the interest of the nation and his region – which has been significantly divided by dispute over who should come to the role in party leadership.

In a video message to supporters, Abdirahman Sayli’i reiterated that his arch rival had to be able to unite ruling party supporters in Awdal region ahead of upcoming elections.

The endorsement increases the chances of the current Minister of Trade Mohamoud Sajin to make it to the final stage of the contest for the 4th deputy chairman of Kulmiye party.

VP’s opponent is the minister of commerce. Political analysts state that the VP retired from the race for fear that the minister might beat him in the highly race