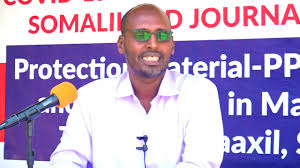 The ministry of information yesterday notified all media houses to renew their operational licenses. Somaliland Journalists Association (SOLJA) has protested against the ministry’s move. It said that the ministry has no role for media licenses.

SOLJA has denounced the directive from the information ministry. The Journalists Association has invited managers of privately owned televisions for an emergency gathering to discuss the new order from the ministry. Solja & managers of private television owners have arrived at the conclusion that the ministry of information has no role what so ever in renewing media licenses and added that they will lodge a case at the supreme court for an urgent intervention. Mohmud Huto, SOLJA’s chair said that the country’s constitution defines clearly which institution is entitled to the media licenses.

He reiterated that the ministry of information has broken the country’s laws. Huto said: ” Since media is the fourth pillar in the country, it is clear that there is no article stating the media outlets to renew their licenses. So we believe that the new order of the ministry is a breach to the laws.” The minister of information appointed a commission that will be in charge of renewing media licenses. The information ministry and SOLJA are now at odds over the registration of media houses in Somaliland.