A statement from the SSE office signed by the chairperson Nura Ali Duhul read:- Your Majesty the Queen of England on behalf of the Somaliland diaspora Network Organizations.

Please know that we are here to support you, your family, the country, and the members of the Commonwealth who are grieving at this time over the loss of your husband Prince Phillip the Duke of Edinburgh.

May peace rest upon you and the nation at this time.

Similarly, most of the Somaliland Diaspora Associations Committees at country levels as well as the Somaliland Representatives and the Missions abroad sent similar condolences to the British Embassies in the respective receiving countries.

Somaliland Society in Europe (SSE) Founded in the year 2001 is established as nonprofit umbrella and network of the Somaliland Diaspora Associations resident in various EU member countries including UK, Scandinavian Countries, The Netherlands, Belgium, Germany, and France. The Umbrella founded by representatives of six Somaliland Diaspora organizations from six different countries in Europe on May 2001 on the 10th Anniversary of Somaliland’s Independence regaining day, which was held in the Nederland’s Leiden city and organized by NOMAD and Somaliland Community in the Nederland’s (ASIN). Eng. Faisal Ali Waraabe, Chairman of the Justice & Welfare National Political Party of Somaliland was also the first chairperson of SSE. 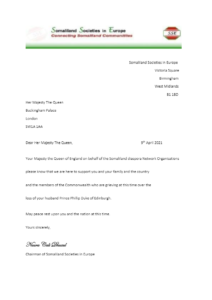