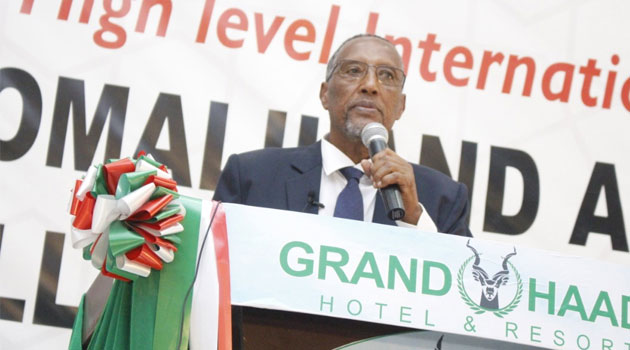 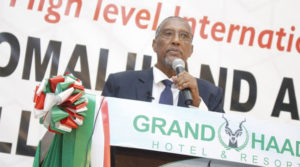 President Muse Behi Abdi said time is ripe for the international community to recognise and appreciate the role Somaliland is playing in the region.

“Our people spoke loudly and with one voice when they voted in the referendum to have an independent state,” the president said referring to the Somaliland’s decision to part ways with the war-torn Somalia.

“We cannot continue living in isolation from the rest of the world. We also have rights that need to be recognised at the international level,” he added.

The two-day conference is aimed at showcasing Somaliland’s achievements over the last 27 years and chart its path for the future. Representatives from IGAD, European Union, Danish Agency (DANIDA) and representatives from several African countries are in attendance.

President Abdi who was elected last year as the fifth head of the state said there is no turning back and Sonmaliland will continue pressing on for its recognition.

“We want peace and recognition of Somaliland. We have achieved so much including the democratisation of the country and made tremendous step in economic development.

“The role we play in the regional economic integration is visible especially with the planned expansion of the Berbera Port. This we have done with very limited resources.
“But we have challenges brought about with lack of international recognition. Our unemployment level remains high due to our inability to obtain our right especially from international financial institutions.”

Opposition party Wadani chairman Abdiqadir Ismail Jirde said Somaliland does not have the leisure and pleasure to go back to the drawing board any more.
“We have charted our future already.”

In his speech, foreign affairs minister Dr Sa’ad Ali Shire said the country has made progress since the war in 1991. “Where there were no schools, we have 1,250 primary schools attended by over 250,000 students and taught by over 8,000 teachers. Where there were no universities, we now have 30 universities, public and private with a student population of over 30,000.”

The minister said the country has also made progress in health, telecommunications and in the hospitality industry.

He said Somaliland is not a separatist renegade region seceding from Somalia but a country that entered voluntary union with another country and which just exited from a union that did not work.

“There are many examples of in Africa of states that united voluntarily and then dissolved the union when it failed. The recognition of Somaliland is not going to open a pandora box as often claimed, neither in Somalia nor in Africa because Somaliland’s case is unique as recognised by the fact-finding mission of the African Union in Somaliland in 2005.

“Somaliland meets all the requirements of an independent sovereign state according to the 1933 Monteviedo convention. It has a clearly defined territory with international boundaries, a permanent population, an authority over its territory and ability to enter into treaties and agreements with other countries and international companies.
Dr Shire said the recognition of the independence of Somaliland is indispensible to maintaining peace and stability in the region.

“Somaliland is a reality, not a dream or fake news and is here to stay. No one can wish it away,” he stated