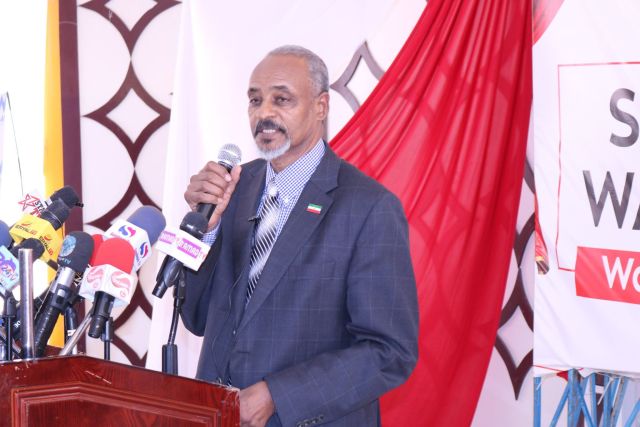 The Head of State H.E. Musa Bihi Abdi has summarily dismissed embattled Minister of Information, Culture and National Guidance, his deputy Mohammed Musa Abees and Defense Minister Issa Ahmed Yusuf Abdalle in a move that underpins his policy of zero tolerance on corruption.

In a mini-reshuffle that is seen to be quite impactful and unprecedented, the sacking of the above three brings in two new faces to the cabinet council.

He is to be succeeded by Abdirizaq Abdi Ali Salah who is a newcomer to the cabinet.

The former Information and defense political chiefs have recently been heavily besmirched by revelations of being indicted by the prosecutor general following negative reports filed by the auditor general that have rendered them culprits in corruption scandals still to be filed in court.

Similarly the sudden resignation in a hush of information director general who was also named in the scandals have been followed by the sacking of his defense counterpart Jamal Abdillahi Muhummed in this move seen by analytical pundits as one that sends a heavy message of non-tolerance of corruption as has always been reiterated by the President.

This is the first time in the history of the country that top ministerial officials are named publicly in corruption scandals and prosecutions seek for their induction officially hence for the law to take its course.

Similarly it’s the first time that the Head of State dismisses such top officials maligned by vices to face the law.

In the same decree on the Presidential order dated 28th March 2019 that was released yesterday afternoon, the Head of State relieves off from duty:-

The change see his predecessor Sharmarke Ahmed  Muhummed Gelle take over from Ayanle in the Kenyan post.

As for the director general, Mohammed Yusuf Ismael is to become the new water resources and development DG, Jamal Abdi Musa Dirie goes to the Constitutional Affairs ministry while Mohammed Abdillahi Said Khaawi becomes the new Youth and Sports DG and the Information ministry now has Mukhtaar Mohammed Ali as its new DG.

Since the Auditor General sounded the warning that his offices will prosecute officials in public offices who pilfer or plunder the public coffers, there have been several officials who have been apprehended since.

Whatever the case the reshuffle is thought to be tailored to address the issue as seen hence sending a strong signal of warning to the rest of public officials.

The appointed officials are as follows:-

So far replacement at the Interior Ministry to succeed Hon. Mohammed Musa Diriye has not been named.