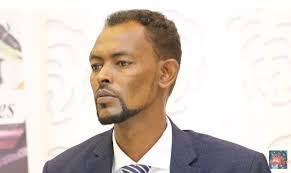 The poet has been in Lasnaod, Sool’s provincial capital so as to attend the closing ceremony of Book Fair.
The Police have not so far issued a statement regarding taking the poet into police custody.
It is confirmed that police have also detained young artist, Adan Hasan Matan, who painted a picture of Somalian leader, Mohamed Abdilahi Farmajo.
The police arrested Hargeisa Local Councillor, Hanad and military officer.
The police are expected to further explain the reason for the apprehension.