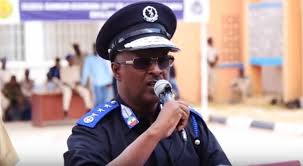 Police boss Dabagale said that the praise shared by the entire police force and attributed his success to the Almighty Allah.

He said police do not base their decisions on social media posts and warned against filing police officers.

He further warned against what he called people becoming more daring the deals with the police.

The police boss was referring to public outcries against two incidents were police officers caught in tape brutalizing civilian women, among the emergence of the videos and the subsequent public outcry.

The police took disciplinary measures against the police officers.

However, today police boss Dabgale seems to be disowning those measures and responsiveness that led him to his popularity.

It is not obvious whether the boss is turning his back on the accountability or he is trying to reassure the rank of the police force that he is on their side.

The Commissioner made the remarks of opening a new police station in Faraweyne village south west of Hargeisa.

On Wednesday, the boss launched a pilot project for effective community policing.

According to the UK government which supports the program, this will help the police implement and develop approaches more effective policing at local level.