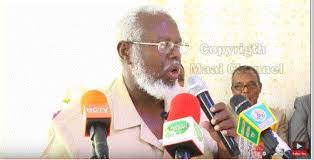 SL deputy health minister, Mahdi Osman Buri, has strongly condemned the two opposition parties for not playing their role in the fight against the deadly novel coronavirus.

He said the government sent a request to the national political parties to join the campaign against the deadly Covid-19 pandemic.

Mr. Mahdi Osman Buri said that the two opposition parties have not yet contributed to anything to the public but just accelerated their condemnation against the government.

Mahdi Said: “Coronavirus is unseen enemy. So this days, we are expecting the opposition parties will largely contribute to the public and this never happened.”

On the other hand, the deputy minister denounced that Awdal province has only one ambulance and says that almost every district has its own ambulance.

Somaliland confirmed the first two cases in March this year. The country has faced with economic hardships and rampant unemployment. A big number of private school teachers are living in a state of misery after schools were closed down.