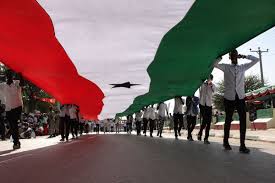 Jacksonville, Florida—Before the Europeans set foot in the Horn of Africa, there was no Somali state whatsoever in the region, other than self-governing clans, some of which were under the rule of the Ottoman Empire such as Berbera and Zeila cities

During the colonial rule in Africa and in many parts of the world, boundaries defining maps of almost all the countries were demarcated based on treaties signed among the involved parties, without the will and consent of the native residents being colonized.

The territories predominantly inhabited by the Somali speakers were not spared from that scramble for Africa in 1884. It was partitioned into three states and two territories: : British Somaliland Protectorate, French Somaliland Colony, Italian Trust Territory of Somalia, Northern Frontier District– a province carved out of Southern Somalia and annexed to Kenya in 1925 – and Haud and Reserved Area that was handed over to Ethiopia by the colonial Britain in 1956.

In 1950s leading to the independence of Trust Territory of Somalia and the British Somaliland Protectorate, there was a sentiment and a desire committed to a concept or a doctrine termed as ” The Greater Somalia” or “Somaliweyn”, and the blue flag of then the Somali Republic – with the five-pointed star in the middle of it – was representing that policy.