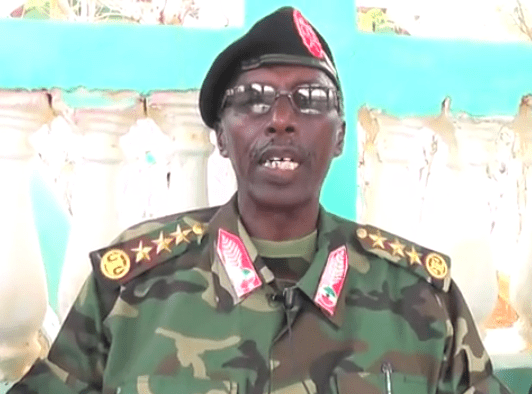 The Commander of the Eastern Sector of the Somaliland Defence Forces, Brigadier-General, Ali Barre, has denied that an attack was launched against his forces in the area around Tukuruq by a rag-tag militia sent from across the border with Somalia.

Speaking to the media, Brig-General, Ali Barre stated ” there were reports in the press that our Defence Forces were subjected to an attack few days ago in and around Tukuruq. This is not the case. About eight kilometers away gun-fire was reported, but, it is the usual ruse by these militia to claim that they had attacked Somaliland forces as a means of raising funds from abroad”.

Brigidier-General, Ali Barre, Commander of the Eastern Sector of the Somaliland Defence Forces continued by stating “it is not the interest of anyone in the region to instigate hostilities and to lie to people overseas to send money in order to cause mayhem and death. Somaliland will defend it’s citizens and it’s borders. We want to peace to prevail in the region, and sincerely hope that those who want to send money to inflame hostilities, would be better advised to send these funds to support their loved ones, and to invest in their towns and villages”.

This is not the first time that rag-tag militia have claimed to attacked Somaliland in order to try and raise money to justify their existence.