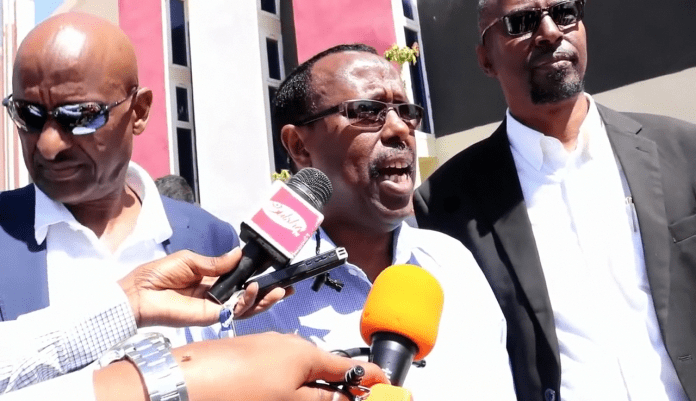 The powerful Upper House of our bicameral parliament, the GUURTI, has averred that the expected forthcoming general elections recently re-scheduled by nine months as to be held by December 2019 will again not have its holding in time feasible.

This was divulged to the press by non-other than that Speaker of the Guurti himself, the Honourable Suleiman Adan, who based his observations from the submission of the National Elections Commission (NEC) to the house yesterday.

According to the follow-up meeting held by the NEC officials at the Upper House which was closed to the media, the Speaker said that the NEC has sounded the untenable fact of not being able to hold the elections in time.

He said that the NEC officials never came with anything new other than the fact the situation on ground depicts that there was still stalemate hindering the holding of elections in time.

The Speaker further said that the NEC officials have accused the executive (thus the presidency), both Houses of our bicameral parliament (thus the Guurti and lower House of the Representatives) and the three official political parties as being the culprits behind the holding back of the electioneering process.

The Speaker underpinned the fact that the said entities were not dong their work when pressed to clarify the issue by members of the press.

He was giving the Guurti’s deductions from the outcome of the meeting they had with the NEC top officials.

On the other hand the NEC chairman Eng. Abdiqdir Iman Warsame was stated that the electioneering process was to go on as planned in a separate press conference.

He noted that they only answered to the Guurti summons hence gave them up to date facts on the situation at hand at the NEC concerning both technical and on non-technical aspects.

Given that scenario, perhaps a Guurti MP’s observation on the political aspect is what the Speaker was expounding on.

Outspoken veteran Guurti MP Hon. Mohammed Mohamud Yasin Deeg claimed that NEC officials told them what they had reported to them (Guurti) in an earlier summons was similar to the latest one that they (NEC) had lacked the goodwill of the other stake-holders in the electioneering process to aid in the dispensing of their duties.

The MP, just as his boss the Speaker, concurred to the fact that the NEC could not go about their duties while having their hands tied by political aspects.

This, in advent, means that the political parties and the presidency had to reach an accord to have the electioneering process expedited with the participation of the parliament as concerns any legal aspects outstanding thereof.

The Guurti was recently reported to have written to the NEC seeking to know what’s holding back the electoral voters registration.

In related news the NEC Commissioner who is the institution’s spokesperson denied the fact that they have expressly accused the presidency, both Houses of the Parliament and the official political parties as having been the culprits behind the lagging of the electioneering process that is slated to be held at the end of this year.

Mr. Said Ali Muse said in an exclusive interview to a local media yesterday that they had not accused any entity on the situation of the process which has hit a snag.

He noted that as the NEC continues its technical procedures on their daily commitment to their duties, he admitted that the snags or bottle necks that hindered them in their job were still present.

He reminded the media that since they last gave their report to the Guurti in mid-January, the impasse on the political aspects was still there and that nothing has really changed.

He said that they propped the Guurti yesterday to see to it that the impasse is overcome given that the supreme political institution had in the past coaxingly flexed their muscles to see to it that dialogue to overcome similar bottle neck was held and that differences were positively thrashed out.

The Spokesman precisely named the impasse between his institution (NEC) and the Wadani political party as one such incidence of bottlenecks that ties their hands.

He however generally said that if political aspects were addressed immediately the elections institution would attain their tasks within 10 months.

He said that this was the 5th time they gave their report to the Guurti while heeding their summons. Other political issues in query are the quota seats amongst others.