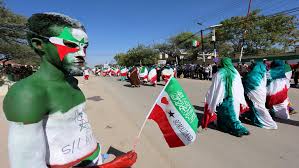 Nation-building is viewed as a distinct process to sociologists; nonetheless, they are closely linked to state-building. Nation-building in this sense is one of the most common processes of collective identity creation. The goal is to legitimize a constructed state authority within a given territory. There is value in connectedness and uniting together for the within a community. The nation is defined as a community of individuals who share common values, language, and/or customs and may become aware of the need for political sovereignty.

From this perspective, the two key elements of nation-building include a unifying ideology and an integration of society. Unifying ideology refers to the existence of some variation of “nationalism,” the function of which is to legitimize policies of nation-building as well as to mobilize socially for its end. Integration of society entails the incorporation of different groups into common society. Close communication among the groups is essential for a successful outcome of nation-building. The key pillars of the integration process involve the development of national communication, media, and education in order to establish a national political and cultural dialogue.

However, after defining nation building above, I believe all Somaliland citizen have a huge responsibility to build our nation in order to reach our national goals. For the last thirty years, Somaliland is at peace and we know peace is the sign of development and prosperity. Peace is the mother of civilization and war is the demon of destruction. Civilization and development cannot progress if there is no peace in the country. Somaliland people are great people; we are naturally very traditional and take pride in our country. Although nowadays, there are many issues in Somaliland including Sanag Region, which include high unemployment rates, many of its youth leave to seek other opportunities and some of them died during their journey. As Somaliland citizens, we need to take our part regarding building our nation. Somaliland’s election is approaching us very soon, for three political parties agreed to hold an election at the end of this year.

I listened to Mr.Ahmed Yasin speech yesterday at the City of Borama. Mr. Ayanle is very patriotic and a hero to us all. He is wise beyond his years and is always attuned to the realities on the ground in Somaliland. His speech yesterday pointed mainly at important issues in the western regions of Somaliland and the whole nation. Ayanle’s speech is historic for our community and for Somaliland. The significance of Ayanle’s speech can be compared to that of Winston Churchill’s “unity of nation” speech.  Mr. Ayaale’s speech touched on our current reality and our history. He has shown great love for his people and has acquired a lot of potential leadership capabilities because he talked about reality and no one ignores his speech. I hope our president will solve this issue before the election because it’s good for our country.`

Finally, nation-building is key for development for every nation. I defined nation buildings and other key terms in my previous articles and the unity of our nation. Therefore any one of us we will take our part in orders to build our nation and solve our national issues including the Sanag region and solve any other issues including parliament sits, unemployment, and more. I believe together we can solve easily.