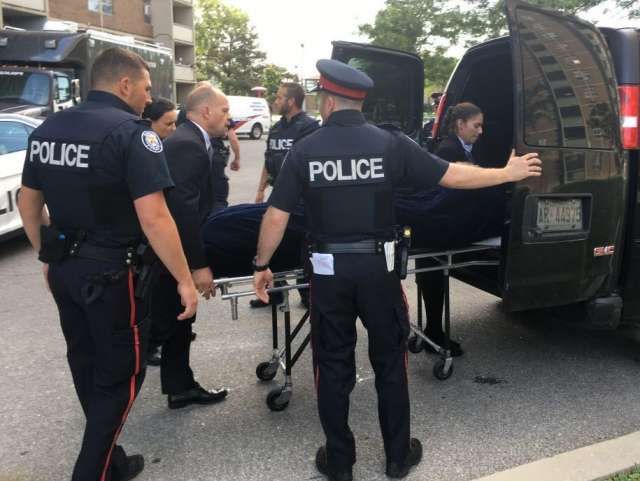 A day after scores of Somali mothers pleaded for help stopping gun violence, a 16-year-old Somali boy was gunned down in a notoriously rough North York neighbourhood.

Toronto Police were called around 1 a.m. Thursday to a Toronto Community Housing Corporation highrise on Falstaff Ave., near Jane St. and Hwy. 401, for reports of gunfire.

The boy’s body was found in a stairwell.

The teen, identified by police as Hanad Ali, is the city’s 35th murder victim of the year.

On Wednesday, a group of Somali mothers made a presentation to the Toronto Police Services Board to express their concerns about the number of young men dying from gun violence and the lack of action being taken to stop the killings.

Samsam Hayow was one of the women at the board meeting and lives at the building where Hanad was killed.

“He had just turned 16 and was not in a gang. I know his mother and he grew up in front of me. He died because he lived on Falstaff,” Hayow said.

“Our boys are dying every day. My boys are afraid to go outside. What are they police doing for us? We work. We pay taxes, but what do they do for us?”

One inconsolable woman, who claimed to be the victim’s older sister, had to be restrained by police from attacking media as the coroner removed the victim’s body from the building.

“My little brother died today. He died by himself … I don’t have the words. The entire community feels it.”

Shamso Elmi, one of the leaders of the Somali Mothers Movement, which represents 200 Somalia mothers who have lost sons to guns, also addressed the TPSB on Wednesday.

“This shows the state of crisis we are in. We aren’t safe, but until my last breath I have hope one day we will be,” Elmi said.

After the mothers spoke at Wednesday’s meeting, Chief Mark Saunders said the board had heard them and “we will work with them.”

Police, who are reviewing security camera footage, say three males were seen fleeing the area in a dark-coloured Honda.