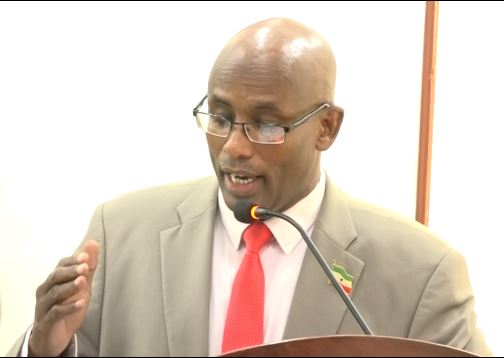 A member of House of Representatives of Somaliland Nasir Ali Shire  has offered congratulations to President-elect, Ahmed Mohamed Islam a.k.a. Ahmed Madobe as the president of Jubaland, a state in the south of Somalia.

A statement made by Mr. Nasir, SL lawmaker has cabled a message of felicitations to Ahmed Madobe and appealed that he should extend an invitation in order to attend his inaugural ceremony.

The SL lawmaker has said that the victory reached by Ahmed Maobe is a political defeat to the narrow minded officials installed at Villa Somalia.

Mr. Nasir has said that the intention of Villa Somalia occupiers have hidden agenda which is to dismantle the thriving states in southern Somalia.

He indicated that they are using excessive power to suppress the support of grass roots in Jubaland that threw their weight behind the president-elect.

He accused the Farmajo leadership of following the footsteps of the late deceased Somalia leader, Said Barre that led the country to destruction during his iron fist rule in the 1970 to 1990.s.

The SL MP characterized Ahmed Madobe as brave man and fought against the smear campaign launched by Villa Somalia occupiers whose main intention was to underestimate his political strength.

The incumbent Jubaland leader has returned to power following his reelection to the presidency for third time since Juabalnd’s inception.

He secured 56 of 73 votes in a first round Thursday, defeating three other candidates. His closest challenger, Anab Mohamed Darir, received 17 votes. Madobe was immediately sworn into office for the next four years.