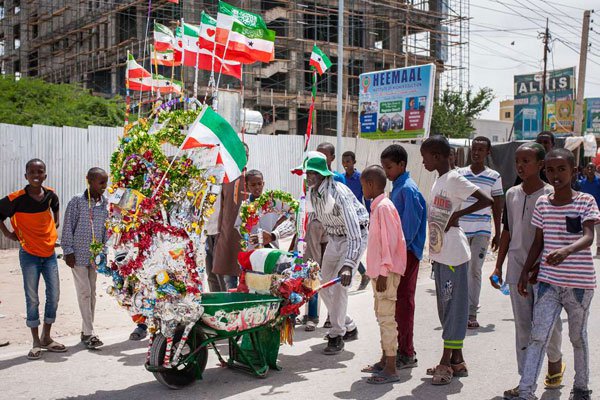 A man pushes his decorated wheelbarrow during celebrations of the 27th anniversary of self-declared independence of Somaliland in Hargeisa on May 15, 2018. PHOTO | AFP

Somaliland has the world’s fourth-lowest GDP per capita and a high income gap between rich and poor, according to data from the World Bank.

Yet the country has been resilient with little foreign aid.

With a GDP of $400 per head, Somaliland is wealthier than countries like Burundi, the Democratic Republic of Congo and Malawi, according to a survey by the World Bank.

Since unilaterally declaring independence in 1991, Somaliland’s efforts to boost development are limited by low inflows of donor aid. The government’s main source of revenue for its $400 million budget has been the port of Berbera, which is being rebuilt by DP World from the UAE, at a cost of $442 million.

There is also hope of mineral discoveries. UAE-based RAK Gas and UK-based Anglo-Turkish oil company Genel Energy have been engaged in exploration over the past four years in hopes of striking oil.

“Ours is a resilient economy. We know we are not getting any aid from the major financial institutions, so we have to make do with what we have,” Somaliland Finance Minister Saad Ali Shire says.

After years of conflict and the ouster of former Somali dictator Mohamed Siad Barre, Somaliland declared independence from Somalia in 1991.

Somaliland has its own police force, army and currency, and has held regular elections for parliament and a president. It enjoys relative peace and stability, unlike Somalia, where African troops are helping the government fight Al Shabaab and Islamic State militants.

But without recognition, Somaliland’s economy is largely dependent on diaspora remittances.