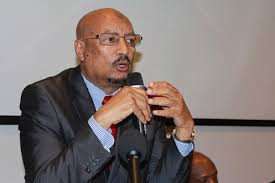 The leader of the opposition party Ucid, Faisal Ali Warabe , was warmley received and welcomed by a large number of supporters in Egal International Airport, Hargiesa.
Faisal Ali Warabe returned from the Somali Partnership Forum in Brussels, which was a two day forum organised by the European union for the Somali Governments and States.
Faisal Ali Warabe spoke to the media and Stated that he is thrilled and happy to arrive back to his homeland, Somaliland.
Faisal clearly outlined where his loyalty lies by specifically stating he is not someone that is to ever betray Somaliland, but rather he attended this controversial meeting in order to lobby and fight for what Somaliland rightly deserves. Faisal Ali Warabe is of the opinion that Somaliland needs to engage and attend such important meetings for its overall betterment. Faisal claimed that through his lobbying he was able to keep the ongoing deal between Somaliland and the EU that relates to Somaliland receiving financial assistant separately rather than it being channelled through Somalia.
The meeting was deemed controversial after President Bihi criticised Faisal Ali Warabe attending such futile meeting which is not specifically aimed at the overall interest of Somaliland. Faisal Ali Warabe responded by stating that he is not interested in entering disputes with the president over this matter, however he wants people to focus on whether Somaliland is currently progressing in its development and in it’s pledge for independence. Faisal concluded his speech by stating that Somaliland’s government needs to understand that they will be held accountable for the way they run the country and if we see the president does not have the capacity to run the country effectively then we will do something about it.
by : Ahmed A B Ibraahim