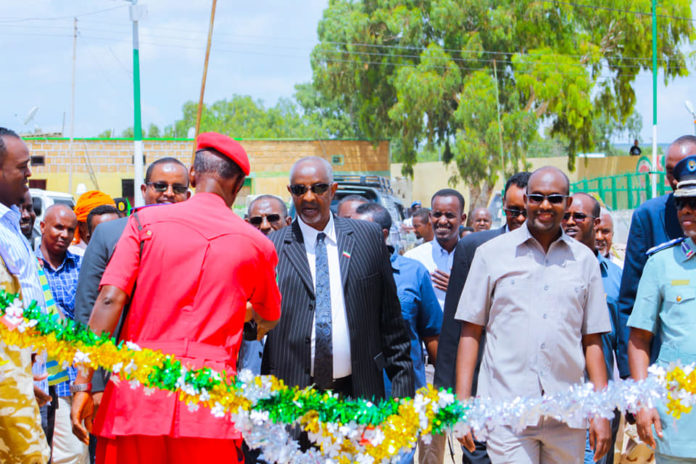 The Firefighters brigade has acquired a service station in Gebiley.

While inaugurating the station, the Interior Minister Hon. Mohammed Kahin Ahmed noted over the week that the force has been diligent in their services to the nation, countrywide.

He noted that the department was created and sustained, without external aid, other than that of the government alone.

While flanked by the ministers of Public Works and Telecommunications, Hon. Kahin thanked the Gebiley Mayor, Cllr Mohamed Amin Omar, the regional governor and the municipality executive secretary for having seen to it that the Fire Brigade station was put in place, playing a major role in the process.

He pointed out that the Gebiley council has subsidized in allowances for the officers, petty cash and fueling vehicles for local running services.

Of note is the fact that since its inception a few years ago the department has marvelously undertaken 3373 operations of complex nature that ranged from fighting raging fires, rescuing both humans and domesticated animals from jaws of death in bizarre casual circumstances to saving victims at scenes of accidents.

With the presence of the commander of the National Fire-fighting Brigade Brigadier General Ahmed Mohammed Hassan, a guard of honor was mounted by the servicemen.

The area mayor outlined what his council injected to the department to pep it up in boosting its services to needy residents.