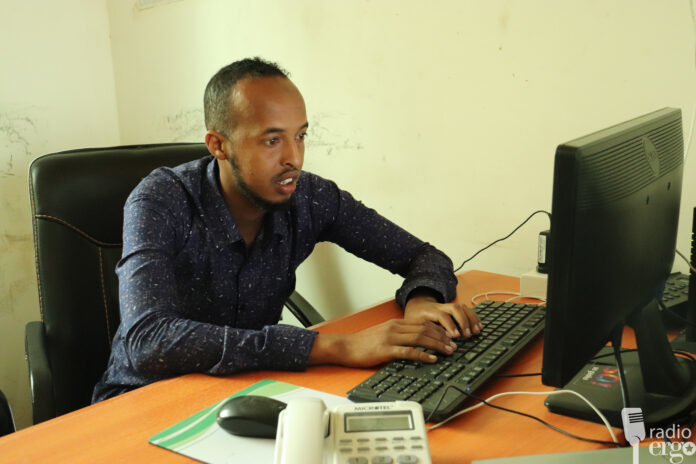 A two-day job fair held in Hargeisa, Somaliland, has helped 50 young people, including 20 women, find gainful employment. The job fair, billed as the first of its kind in Hargeisa, was held on 29 and 30 December 2019 at Hotel Maansoor and was attended by local companies and 300 job seekers.

Bukhari Mohamed Abdillahi, 26, who has been job hunting for more than two years, was among those who clinched a job at the fair.

After graduating from University of Hargeisa in 2017, Bukhari worked as an unpaid intern for about a year but has never had proper employment. He applied for nine different jobs but was not hired due to what he believes is a prevailing nepotism in society. This, he said, has often led him to question the value of his university education.

However, at the job fair, Bukhari had a chance to connect with eight local companies, one of which hired him on the spot. He starts work in January as a marketing officer at an internet company.

“This is the first step in my professional career. Being employed is good for morale and is key to personal development. I’m happy and confident about my future prospects,” said Bukhari.

Among the companies that exhibited at the job fair are: Dhoweye, a taxi and car-rental company; Sahal, a long-distance transportation company; So Gasho, an internet service company; and Amal, a money transfer company.

Kamal Hassan Isaq, the head of the youth development department of Havayoco, the non-profit organization that sponsored the fair, told Radio Ergo that 50 youth had been hired at the event in a fair and transparent manner. All the interviewees were judged solely on their skills and suitability for the available positions.

Hoodo Abdirahman Ali was among 20 young women hired at the fair. She starts her first job in January with Amal, a money transfer or hawala company, more than a year after graduating with an accounting degree from University of Hargeisa.

“Every graduate ought to be employed, be self-sufficient and support their families. Even if you want to continue with further studies, you still need to work and find a source of income somewhere,” said Hoodo, who is hoping that her new job will help her to contribute to her family’s living standard.

The job fair in Hargeisa was the first of its kind, where local employers were able to present vacancies and job-seekers had a chance to compete for these positions in openly, free from nepotism and discrimination.