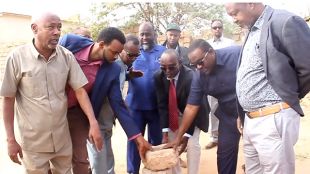 HARGEISA– The ministry in charge of animal husbandry and fishery has recently announced the ban of illegal fishing in its shores and hence will educate on citizens to start eating fish. The minister has asserted that the government has established livestockk diagnostic clinics in all regions whereby animal rearing has to be transformed. Hon. Hasan Mohamed Ali has made the above remarks during the laying of the foundation stone of livestock diagnostic clinic in Buroa. The minister has announced that the gov’t has to pay the funds for building the new clinic.