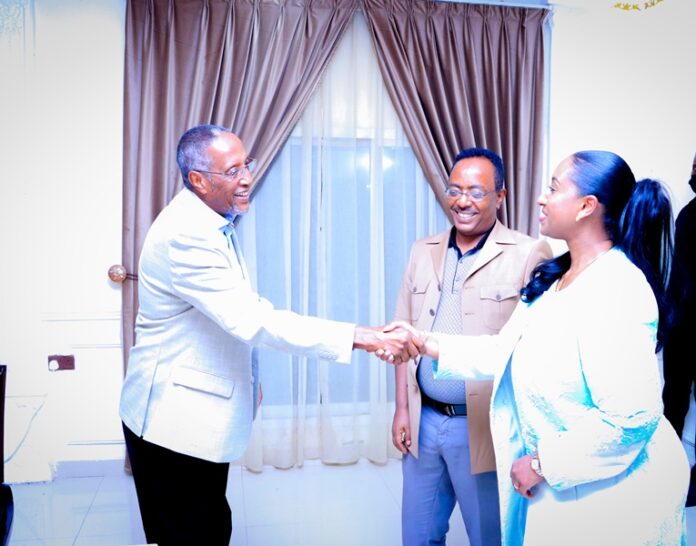 A delegation from Ethiopia signed an agreement with the government of Somaliland.

A delegation from Ethiopia consisting of the minister of transportation Dagmawit Moges, the national security advisor of the Prime Minister of Ethiopia, Redwan Hussien, deputy director of the African Affairs of the Ministry of Foreign Affairs, Jamaluddin Mustafa, director of maritime affairs Yehualashet Jemere and the Ethiopian ambassador to Somaliland Saeed Muhamed Jibril met with the president of Somaliland and key ministers at the office of the president.

In a press statement, the office of the president stated that the president hosted the delegation and discussed with them issues, including strengthening the relations between the two countries and the goods movement.

Somaliland Minister of Foreign Affairs, Esse Kayd, held a press conference where he stated that Somaliland and Ethiopia had signed an agreement about a number of issues. The agreement was signed by the national security advisor, the Prime Minister of Ethiopia, Redwan Hussien, and Esse Kayd, from Somaliland’s side,

The minister said the two countries agreed on the price of Qat and vegetables from Ethiopia to be returned as it was before it was raised.

The two sides also agreed to form technical committees to implement agreements reached by the two countries concerning commerce, transportation and transit and the continuation of the talks about Berbera port’s development.

The delegation’s visit to Hargeisa came after Qat traders threatened to halt Qat imports from Ethiopia due to the raising in its prices.

Qat is a stimulant leaf that grows in Ethiopia and is heavily consumed in Somaliland.

According to government figures, Ethiopia gets millions of dollars from the Qat exported to Somaliland where the majority of male adults consume.

Health experts warn of health risks associated with the Qat which is banned in a number of Western countries where it is listed as a drug.