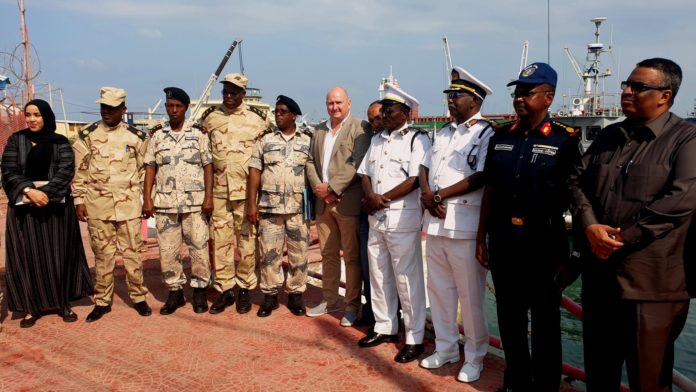 Somaliland is in the main Eastern migration route to the Gulf countries via the Red Sea, according to the German Society for International Cooperation (GIZ). On 17-19 December, EUCAP participated in Cross border exchange between Somaliland and Djibouti Coastguard on Maritime Reception and Referral. The aim of the exchange, organized by the GIZ, was to facilitate co-ordination between Somaliland and Djibuti in combating migrants smuggling, human trafficking and assisting vulnerable migrants at the Sea.

Estimates suggest that there are at least 20,000 undocumented migrants, mainly Ethiopians, in Somaliland although actual numbers could be much higher. Documents distributed by GIZ, quoting International Organization for Migration (IOM), report about the Somaliland’s expansive coastline as a critical shipping route that remains prone to clandestine activity, people trafficking, smuggling, piracy and exploitation by foreign fishers. Poorly effected border control measures, a lax in inter-agency coordination and corruption are amongst the greatest impediments to addressing irregular migration and smuggling occurring in Somalia’s territorial sea.

Discussion on the administrative and operational organization of both the Djiboutian and Somaliland coast guards and areas of mutual interest also took place.

During the exchange meeting, EUCAP Coastguard Adviser Niklas Ceder gave a session about the Convention on the Law of the Sea (UNCLOS) and the International Convention on Maritime Research and Rescue (SAR). The presentation got excellent feedback from all the attending parties and inspired discussions among the participants.

After the negotiations in Djibouti, a Memorandum of Understanding (MoU) on enhancing cooperation within the maritime domain was signed between the Somaliland and Djibouti Coast Guards. Cooperation between the two Coast Guards could include sharing information, exchange of expert visits, workshops, seminars and other mutually agreed activities. EUCAP advised Somaliland Coast Guard in negotiations on the MoU.

“This meeting and negotiations can be seen as one important step in the long fight against migrants smuggling and human trafficking in the area. The participants were willing to cooperate and they used the opportunity to network across the border. Interesting field events and well-executed program made the event successful”, says EUCAP’s Niklas Ceder.