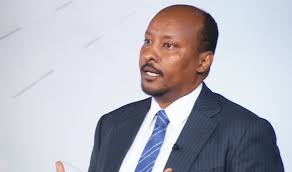 Mr Abdirashid Mohamed Saeed Duale, the CEO of Dahabshiil group of companies speaking to BBC Somali language service spoke on the importance of the UK-Africa Investment Summit held in London.21 African heads of states and many business leaders were attending the UK-Africa investment summit.

Mr Abdirashid Mohamed Said Duale, the CEO of Dahabshiil group of companies who were among the businessmen taking part in the UK-Africa Summit told BBC Somali language that many commercial firms were invited, and investment was discussed. Africa’s economic potential is huge, with eight of the world’s 15 fastest growing economies and a population set to double to over 2 billion by 2050.  Dahabshiil group of companies has presence and invested heavily in many African countries thus why we were invited to the summit.

He added, “Africa stands to immensely benefit from this UK initiative in terms of development and jobs creations, though in recent times the Chinese and the Russians have increased their efforts in investing in Africa. The UK is strengthening its economic partnerships with African nations, as part of a Government drive to ensure the continent’s growing demand for investment is met by the UK’s expertise and innovation. They are expected to mobilize billions of pounds in private sector investment for Africa, marking a new era of trade between the UK and Africa.

Mr Abdirashid Duale further stated, “Supporting African countries to meet their rapidly growing energy demands through green energy, including better access to solar energy and electricity. The UK wants to help Africa thrive digitally through helping young Africans, especially women, access the internet, develop digital skills and find jobs and that’s where Dahabshiil comes in with Somtel, Edahab and the Dare internet cable. Our world-leading expertise in finance, tech, and innovation should make us the obvious choice and mark the UK and Africa out as natural partners for mutual prosperity.

“This Summit is a major step in unlocking the UK’s unique offer, becoming Africa’s investment partner of choice and benefiting people and businesses across the UK and Africa, and Dahabshiil is proud to be among the international companies invited to be partners and we hope that we shall be able to drive growth, create jobs and boost vital infrastructure, “ Mr Abdirashid said.