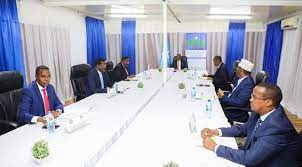 State regional leaders in Somalia are to push for diminishing the powers of the Federal Electoral Implementation Team (FEIT), after it ordered a re-run of the elections for two disputed seats whose results had been annulled.

Stance of regional leaders together with their key allies as well as critics of the outgoing President Mohamed Abdullahi Farmajo, remains unified on the ongoing fraudulent polls.

FEIT earlier said an investigation had found evidence of irregularities in the election for two sears in Southwest regional state.

The ex-parliament speaker Mohamed Osman Jawari said he had been turned down to contest for one of the seats.

Jubaland and Puntland leaders, who have been very critical to the outgoing Somalia’s President, are now pursuing personal gains during the electoral process and want to ensure that their allies win as their counterparts in Galmudug and Southwest state have done.

They deem the electoral body’s power to re-run of votes as direct threat against them.

State presidents want that only the National Consultative Council to have the power to nullify results of disputed voters and order a re-run of elections but the Prime Minister, who is also a member of the council has hailed the electoral board’s move to address concerns raised by the opposition leaders.

Puntland’s leader, Saed Deni, who is about to throw his hat into the ring in the upcoming presidential polls, is exerting major efforts to remove his foes from the list of candidates contesting in the race for parliamentary seats allocated for the region.

The leaders of Jubaland and Puntland have a fear that the electoral body’s powers could serve against them and believe the results of elections for many seats could be annulled due to the influence of Villa Somalia with in the team.