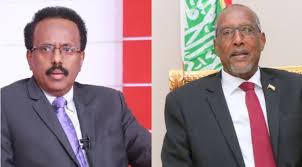 Talks between Somalia & Somaliland are due to resume in Djibouti on Sunday as the two leaders will pay visit to Djibouti.

The convening of this meeting is being backed by the international community to create an atmosphere of mutual understanding between Somaliland and Somalia after years of stranded relations.

The US ambassador to Somalia, Donald Yamamoto, Ethiopian PM, Abiy Ahmed and Djibouti President Ismail Omar Guelleh will also be in attendance of the high level talks.

But no one knows the agenda of the meeting as far as the resumption of the stalled talks between Somaliland and Somalia are concerned.

Somaliland recaptured its independence from Britain in 1960 and later united with Italian Somaliland to form the greater republic of Somalia but that unity did not last long after it separated from Somalia in 1991.

Ties between the two sides became frosty once Somalia and Somalia leaders came to power.

The EU Delegation hopes the meeting becomes a first step to embrace common gains in which all may prosper through dialogue; and the release of emotion retained for a long time. Doors of hope for agreement should not close again.

Tomorrow in Djibouti, I will chair a meeting between President Mohamed Abdullahi Farmajo and President Moussa Bihi Abdi to follow up on the mediation efforts between the two leaders. I have also invited Prime Minister Abiy Ahmed to attend the discussions.