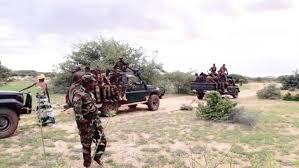 The Somali National Army conducted an operation against Al Shabab group in a bid to secure the main roads in Hiran province.

This was announced by the commander of the 5th battalion of the Somali National Army in Central Somalia, Farah Ali Wasuge.

He highlighted that the operation will be significant in a bid to remove and secure the area from Al Shabab militant attacks.

He noted that once Al Shabab militants are flushed out, it will allow the transport and traffic to move freely without facing and fear of attacks from the militants.

“We move forward in a bid to ensure the security as we launched an operation of flush out Al Shabab remnants from the country. We are closely working with the public and gained their support and contribution. The operation deemed successful in a bid to reopen the roads.” said Wasuge

The Somali army recently conducted a successful operation which led to the takeover in areas of Hiran province which were under Al Shabab militants control.