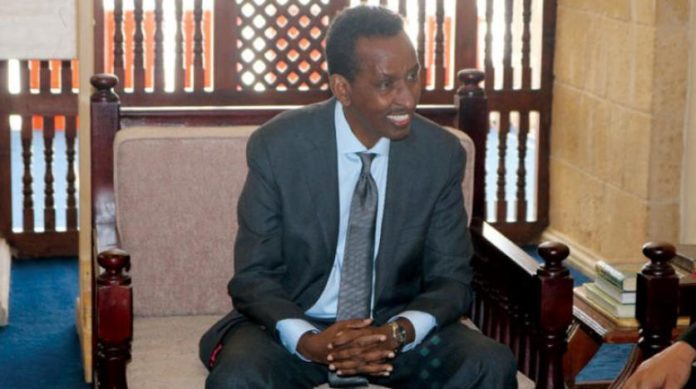 Mogadishu – Foreign Minister of Somalia Ahmed Isse Awad has commended the great role of Saudi Arabia in the Arab and Islamic worlds, stressing that the kingdom has been the biggest supporter of Somalia since its independence.

In an interview with Asharq Al-Awsat newspaper, Awad spoke about launching the entity of the Arab and African Coastal States of the Red Sea and the Gulf of Aden (AARSGA). He said that it will face challenges such as terrorism, piracy, illegal migration, weapons smuggling and maritime pollution.

Efforts to establish this entity have been ongoing for more than eight years – among the council’s goals is to coordinate on the maritime corridor representing an economic, investment and commercial significance for the global economy, Awad said.

He also noted that choosing Riyadh as a headquarters stems from the kingdom’s key role in this entity.

The minister added that the charter has been signed and this will be followed by practical steps to make the council a political, security and economic bloc in the Red Sea and the Gulf of Aden.

Asharq Al-Awsat inquired about a tripartite bloc consisting of Ethiopia, Somalia and Eritrea and whether it is a mini alternative for the Intergovernmental Authority on Development (IGAD).

Awad stated that there is tripartite cooperation in certain fields, but it isn’t an alternative for IGAD, which is an active organization currently transforming into an economic bloc similar to the regional economic blocs in the African continent.

Asked whether the Ethiopian leadership is overlooking decades of animosity and clashes, even foreign pressures, without introducing this with a real reconciliation; the minister said that this isn’t the case, but there is an awareness that this deadlock that has led nations to poverty in all fields can’t continue.

Although there was a certain national, political and religious animosity for centuries but at the time when the world is changing and the geography can’t be changed then why remain a hostage for history, he stressed.

The year 2020 is important for the Horn of Africa; it will witness the 60th anniversary of Somalia’s independence and this is a chance to revise this journey and take lessons as well as correct the mistakes at all levels, he affirmed.

Answering a question concerning Somalia’s foreign policy concepts, Awad said that the country has always been known for its impartiality and remains committed to this. Another concept in its foreign policy is separating the country’s ties with fraternal and friendly states, and the ties among these states themselves.

Speaking about Saudi Arabia and Somalia, the FM said that the ties are historic and unique in all aspects and have developed throughout the past decades.

He added that the kingdom has been the biggest supporter of Somalia in modern history. This support isn’t restricted to finance but also extends to politics and culture. In the meantime, King Salman Humanitarian Aid and Relief Center (KSRelief) has played a vital role in helping Somalis and the total of projects carried out by the center or and those still under implementation exceeded 40 projects with a value of USD184 million.

Meanwhile, regarding the UAE, Awad said that ties between Somalia and UAE were prosperous and Somalia is grateful for all the support shown by the UAE in many fields. Despite the misunderstanding that occurred lately, Somalia is keen to maintain these ties.