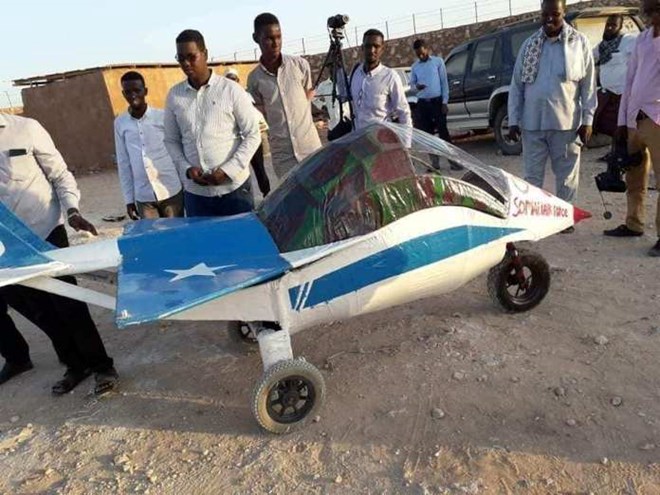 ADADO—A young man from Adado City in central Somalia has constructed a small fighter jet and displayed it in the city on Sunday. The inventor, Ahmed Omar Sahal, engineered a fully functioning small jet. He painted the Somali flag on it and named it Somali Air Force. Sahal said he would give his fighter jet to the Somali Air Force.

Somali Air force was disbanded when Somalia’s civil war erupted in the country in 1991 and has not been in operational since then. The UN put an arms embargo on Somalia in 1992. The county is struggling to rebuild its national army.

Social media users in Somalia and in the Diaspora have widely shared videos and photos of this young man’s invention. According to his friends, Sahal did not graduate high school but he has been interested in engineering and building things.

Relatives and friends told Somaliaffairs, Ahmed Omar Sahal, has a very big ambition but does not have the support he needs to advance his education. Adado city does not have a higher technical institutions that can train students like Sahal for the skills they need.