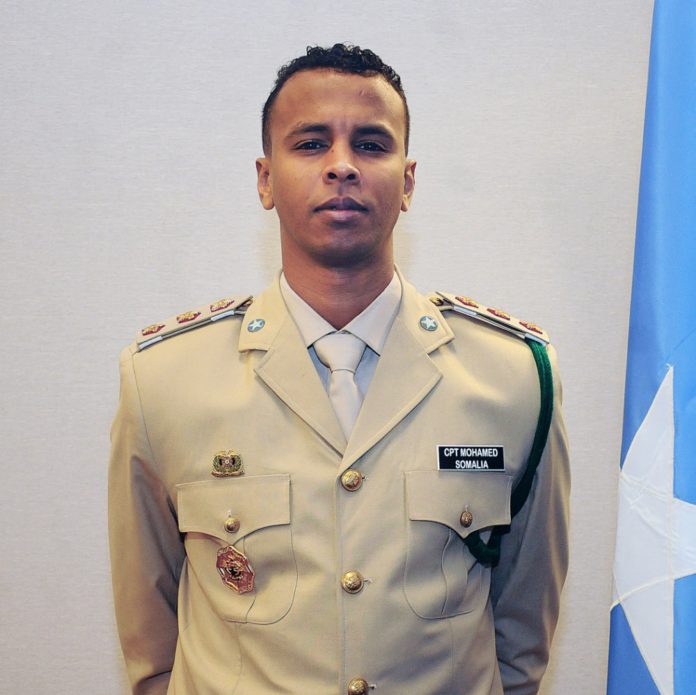 FORT LEE, Va. (Feb. 28, 2019) — It surfaced during his childhood in a typical American suburb setting replete with friends, video games and extracurricular sports.

It lingered in high school with a growing comprehension of his good fortune and a burgeoning understanding of world affairs.

It persisted as he entrenched himself in study at the University of Southern Maine and further gained a sense of what would give life purpose in his adult years.

African-born Mohamed Yusuf Mohamed had nurtured constant suppositions about his fate had his family not immigrated to this country from war-torn Somalia in 1990.

“Growing up, I always had a question about who I would be if A, B, C or D hadn’t happened to me,” said the now Somali army captain and recent International Military School graduate of CASCOM’s Army Logistics University. “Would I be a refugee, not having a chance to seek education? Would I be a child soldier? Would I be dead?”

Mohamed was a year-old when his family departed Somalia for the U.S. due to an impending civil war. A dual citizen on paper, he sees himself as fully Americanized but unable to erase the cultural and spiritual connection with a homeland that is still rebuilding. The 29-year-old wants to be part of the recovery and summed up his desire with this perspective:

“I was afforded this chance, but a lot of people are still suffering,” he said.

Meaning there is work to be done, and his fortuitous circumstances would not absolve him from the personal responsibility of helping to pull his countrymen out of the strife plaguing the Somali nation for the past 25 years.

Mohamed’s plan to help did not initially include enlistment in the Somali National Armed Forces – which he eventually did in 2017, two years after his college graduation. The international relations major intended to start his work through diplomatic channels in the comfort of an office building in an urban setting. His first opportunity was an internship with the Permanent Mission of the Somali Republic under the United Nations in New York City.

“It was unpaid, but that exposure – essentially working as a diplomat there – really gave me hope for the country,” Mohamed said. “What I also began to recognize was the many things needing to be changed that probably wouldn’t happen in that setting.”

More of a pragmatist than an idealist, Mohamed knew country-wide reform would not occur overnight and could not be achieved entirely through diplomatic circles. The inherent politics and other factors during a subsequent posting in the Somali capital of Mogadishu convinced him to pursue alternatives. As a result, Mohamed relinquished his diplomatic position but decided to remain in the hometown from which his parents migrated to become more intimate with the country’s issues.

“To change any system you have to be in the system to change it,” he said, referring to his 2016 decision to live in the capital. “That’s the idea I formalized.”

Soon after, Mohamed went to work for a non-governmental organization whose mission was to reintegrate former members of terrorist factions in the country. The project was clearly meaningful but not without danger from adversaries determined to undermine the progress of their efforts.

“You found people were being assassinated or targeted – (human) rights workers, aid workers, anyone who was against their message,” he recalled. “As a humanitarian living in Mogadishu with its bomb and terrorist attacks, I came to the realization my contributions had to be more impactful … something that went at the root of the problem.”

Mohamed enlisted in the SNAF in 2017, further abandoning his American lifestyle and a potentially prestigious career in international relations. He began a new journey in an army still rebuilding itself within a country doing the same.

His recent promotion to captain and the subsequent opportunity to attend Basic Officer Leader Course training here – he graduated in January – are further examples of Mohamed’s steadfast resolve. Brimming with optimism, he admits Somalia has a long way to go to achieve peace, prosperity and economic stability, but the work has to start somewhere. For him, that means applying the leadership and team management skills he acquired during his recent training, and demonstrating the professionalism he observed daily at Fort Lee.

“I suppose the lesson in all this is that I’m trying to make a difference in my own small way. Would it be easier to just walk away and live the American life? Sure, but there are always challenges in life,” he said, “so why not go after the hard ones – the things no one should have any hope for or be optimistic about. Why not?”

That kind of sentiment struck a refreshing chord in Donna Wells, IMSO chief, who had no difficulty boasting about Mohamed’s many admirable qualities.

“He’s very personable and seems like a young man who is very committed,” she said. “He has passion for his country, loves his people and he believes he’s one of those who can make a difference.”
Mohamed – who gave up a career in diplomacy and life in the West for uniformed service in the Third World – said his plans are to serve in the military for however long it takes to paint this picture he envisions for Somalia:

“A country that opens its doors to the world; that is developed; that plays its role in the international community in terms of the issues plaguing the citizens of the world, like poverty, climate change, renewable energy and education.

“It will all take a while, but we do have some bright stars here and there.”

Mohamed’s example of selfless service is without doubt one of them.